Home News armed forces Safety Naples: fight against "barrels at the end of the year". I c ...

Naples: fight against "barrels at the end of the year". The carabinieri discover 1.800 kg., In the living room of an 34enne ... 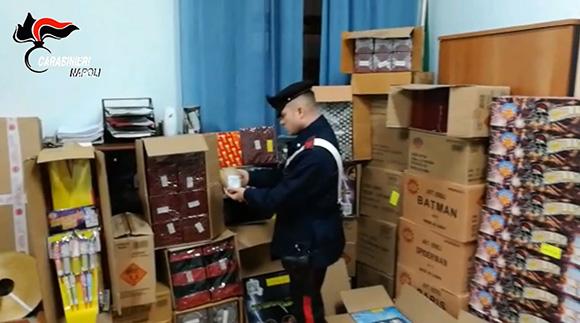 During services to counteract illegal manufacture and sale of pyrotechnic artifices, the Carabinieri of the Tenenza di Casalnuovo di Napoli and of the Pomigliano d'Arco station arrested an uncensored 34enne of Brusciano considered responsible for the illegal detention of explosives and illegal detention for trade of exploding material.

During the search in his house in Brusciano, the military of the weapon found him in possession of 3.265 pyrotechnic devices (for a total weight of 1,8 tons) including also real bombs hand-crafted. All in a densely populated area of ​​the Neapolitan area.

In the living room of the man there were packed 265 pieces, among which the so-called "onions", bombs containing 175 grams of explosives and "Hamsik 17 bombs", mortar throwing bombs whose use is reserved exclusively for specialists of the pyrotechnic sector .

The other 3.000 pieces, weighing about 1,7 tons, were instead pyrotechnic artifices of the fourth and fifth category illegally detained and about to be placed on the illegal market on the occasion of New Year's Eve.

Denounced in a state of freedom "the helper" of the 34enne, the brother 37enne uncensored, surprised to help him in the storage of material in the room.

To catalog and take away the material in safety, the anti-sabotage firemen of the provincial command of Naples intervened. the arrested person is now awaiting a very direct rite.