Home News armed forces Safety Exhibition on the interventions of the GdF: "S ...

Exhibition on GdF interventions: "On the Traces of Caligula" 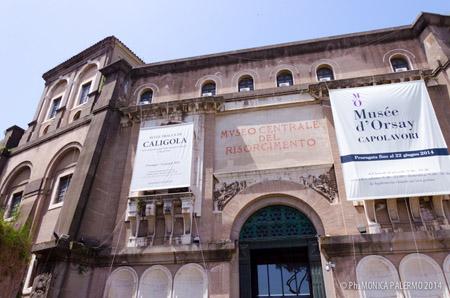 About three years ago the finance guard managed to recover at Fiumicino a statue was about to be stolen in foreign territory, had been reduced to pieces to be easily inserted into a container destined for Switzerland.

The sculpture after the seizure was entrusted to a team of restorers. Now that the statue has been reconstructed in its original shape, after a laborious and complex restoration, it has been made available to the general public. Thus was born the exhibition "On the trail of Caligula. Stories of great recoveries of the Guardia di Finanza at Lake Nemi ", hosted at the Vittoriano Complex from 23 in May to 22 in June 2014 with free admission, with the aim of giving visibility to interventions by the Guardia di Finanza to safeguard the assets of antiquity at risk of aggression.

Yesterday morning news was given to the press and in the afternoon the inauguration was held.

To explain, during the conference, the work done by the men of the finance guard were Colonel T. st Cosimo Di Gesù, commander of the tax police of Rome of the GdF and Lieutenant Colonel Massimo Rossi, commander of the group protecting archaeological heritage - police nucleus tax law of the gdf.

The colossal sculpture, identifiable as Caligula enthroned as Zeus, of the beginning of the I century AD, is formed by two fragments of marble of Thasos and represents a male figure with mantle, seated on a throne.

A Caligola, however, still lacks the head and the yellow flames are still investigating for its discovery, the research relates to the antique antiquarian environment, interested in possessing the work could be "a wealthy Russian industrialist interested in purchasing through a luggage racks of Geneva ", as the commander Massimo Rossi writes in the preface of the catalog" On the traces of Caligula "(Gangemi Editore).

In addition to the monumental sculpture, the fulcrum of the event, a set of marble and bronze artifacts recovered from the clandestine induced and related to the figure of Caligula are exhibited for the first time, as they come from the nemorense territory and in particular from the emperor's ships , from his villa on Lake Nemi and from the sanctuary of Diana Aricina.

In the exhibition you can also admire other findings, such as a marble crater decorated with a chariot race from the second half of the second century AD, a marble statue of Apollo and a bronze copy of a box with an apotropaic hand (both from the 2nd century AD) coming from a of the Emperor's ships. The public will also be able to follow the work that the GdF performs to protect art and the archaeological heritage, through videos and photographs, and display cases with equipment seized from "tomb robbers".

The finance guard, a special police corps employed by the Minister of Economy and Finance, is organized according to a military order and is an integral part of the Armed Forces, as well as of the police.

The yellow flames are used to protect the historical-archaeological heritage, through a specific articulation of the Rome tax police, the archaeological heritage protection group, whose task is to protect the sites at risk of tampering and to monitor the national antique market (with extension) in foreign territory through the mutual assistance of the rogatory), in concert with the peripheral derivations of the Ministry of Cultural Heritage and Activities and of Tourism and with the proceeding judicial authorities (prosecutors of the republic and state advocacy).

During the night, the carabinieri of the ROS and of the Provincial Command of Milan carried out an Ordinance of ...
1178
Read