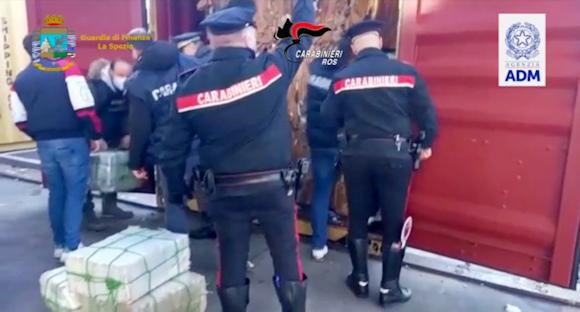 The financiers of the Guardia di Finanza of La Spezia, the ROS Carabinieri, the officials of the local Customs Office, in perfect investigative synergy, have completed a complex and articulated transnational investigation - carried out under the coordination of the District Anti-Mafia Directorate of Genoa in connection with the Public Prosecutor's Office of La Spezia - blocking a large quantity of drugs hidden in a container from the Dominican Republic and bound for the Port of Valencia on which a forged seal had been placed inside the merchant port of La Spezia.

The narcotic substance, hidden in a load of waste paper, was divided into 12 packs containing 359 blocks ready to be taken with the so-called system rip off, consisting in stowing the drug immediately behind the doors of the container, so that it can be easily picked up by traffickers during the stop of goods in the port areas.

Following the examination of the Drop test the substance was found to be cocaine of the highest quality and purity; the seized drug, for a total of 412 kg, would have yielded, once placed on the market, over 100 million euros.

The service activity, testifying to the constant and effective action carried out in synergy by the Guardia di Finanza, ADM and the Carabinieri, is part of the constant monitoring of shipments from South America which had already allowed massive drug seizures in the port of La Spezia. . Just two years ago, 338 kg of cocaine hidden inside granite slabs from Brazil were found and seized in the same port.