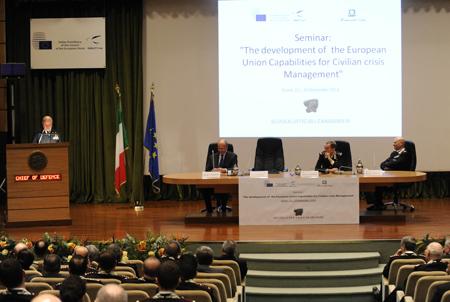 On the occasion of the Italian-led semester of the presidency of the European Union council, the 13 seminar entitled "Development of the abilities of students" was held in the main hall of the officers' school of the carabinieri at the 14 and 2014 November. EU civilian crisis management. Role of Italy and of the police with military statute ".

The workshop was part of the 10 ° event within the program of meetings organized by the defense ministry during the European semester with Italian guidance.

The seminar, introduced by the greetings of the general commander of the Carabinieri Leonardo Gallitelli and continued with the introductory remarks of the Chief of Staff of the Carabinieri General of the division Ilio Ciceri, saw the participation of authoritative guests, civil and military, engaged internationally in the subjects covered by the seminar.

The topics covered allowed the audience to develop excellent insights and insights. Particular attention was paid to the role of the EU CSDP (Common Security and Defense Policy) and to the need to develop a more and more effective comprehensive approach between military and civil instruments in stabilization operations in which both sides are involved. The role played in this context by the police with a military statute was then underlined for the specific ability to perform both police and military tasks.

The seminar also provided an opportunity to illustrate Italy's contribution and the precious role of standardization of doctrine and training by international training centers such as CoESPU and the formation of NATO SP COE in Vicenza as well as of other subjects engaged in stabilization operations such as the Spanish Guardia Civil, the Portuguese National Republican Guard, the Gendarmeria Rumenian Jendarma and the Polish Military Gendarmerie.

Finally, the outline of the future prospects of the EU and CSDP in the civilian management of the crises that will need to be tackled have been outlined.

The event ended with the final considerations of General Gallitelli, of the min. plein. Luca Giansanti and Chief of Staff of Defense Admiral Luigi Binelli Mantelli. 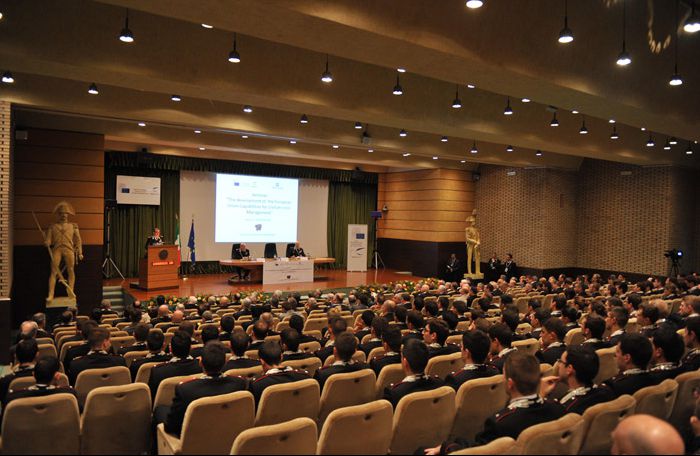