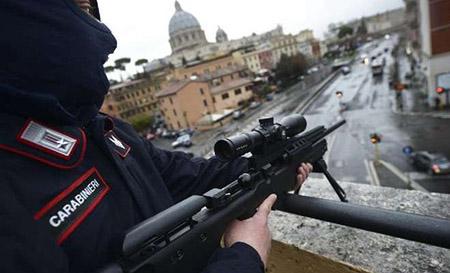 The terrorist attacks in Paris, which occurred in the second week of January, as well as those in Brussels and Denmark, prompted the Italian government to adopt the decree-law to combat international terrorism, in particular the jihadist group ISIS, urgent measures to the fight against terrorism, published in the Official Gazette n.41 of 19 February 2015, also of international origin, as well as extension of the international missions of the armed forces and police, development cooperation initiatives and support for reconstruction processes and participation in initiatives of the International organizations for the consolidation of peace and stabilization processes.

Of the measures implemented by the Italian government, such as the introduction of new offenses and some means of prevention, I am in concert with the need to apply in our regulations the constraints deriving from the resolution 2178 of 24 September 2014 ,, through which the United Nations Security Council debated the spread of the phenomenon of foreign fighters in the service of international terrorism (foreign terrorist fighters), especially ISIS.

This decree-law is on the same wave of frequency as the measures that other European states have decided to adopt. Also at the European Union level there will be support for the efforts that each Member State implements, the harmonization of measures, the exchange of information and, finally, the fight against extremism and the radicalization of organized terrorist groups.

The Security Council, through the resolution referred to above, has committed to all States the adoption of general measures to combat international terrorism. Obviously, this struggle has already been addressed in the previous Security Council resolutions like the 1373 of the 2001 the 1540 of the 2004. Consider that these decisions adopted by the organ responsible for the maintenance of international peace and security of the United Nations, the same executive of this important international organization, would appear to have exercised legislative powers not present in the San Francisco Statute. The reason remains that the 2178 resolution (2014) reports the urgency of stopping the complexity and the changes underway in the most radical Islam. The prevention criterion of this resolution is based on three foundations. First, to block and destroy radicalization and violent extremism; in secundis, the means of preventively circumscribed, in particular with respect to the scrupulous controls on the movements of suspected terrorists; and, in tertiis, the response of justice through the advance of the protection on the criminal level, raising to the crimes preparatory actions, which precede the commission of a terrorist action.

This decree does not totally represent the application of measures that fall within the last two pillars. With regard to the inclusion of new crime figures, this decree, approved by the 10 February 2015 Council of Ministers, conforms to what is reported in the resolution when it punishes the individual who organizes, finances and carries out journeys that have exclusively terrorist gender goals .

Decree n. 41 / 2015 also establishes the punishment not only of those who recruit, but also of the person recruited for terrorist purposes, even beyond the cases of collaborations with associative groups that have the same purpose, as well as for those who self-practice terrorist techniques. The enlargement of the forms of preparation and adherence to terrorist actions is a problem of profound delicacy. The 2178 resolution, just to clarify, has undergone strong criticism in this respect, in particular due to the lack of a definition of terrorism in its structure and the danger of abuse that may arise, as well as respect for the principle of lawfulness and above all of the rights of the human person, despite the continuous reference to them at various points in the decision.

Regarding preventive tools, the 2178 / 2014 resolution highlights the constraint of preventing the movement of terrorists through border controls and the issue of passports. Within the EU, some states have introduced measures regarding the withdrawal of residence permits and travel documents, as well as the revocation of nationality. This last point could give rise to legal doubts, specifically to the broad powers that the London government has carried out in depriving citizenship of suspected terrorists.

In this decree there are measures of the first type, given that the quaestor has the right to withdraw the passport from alleged subjects who are suspected of terrorism, at the time of the proposal to apply the special surveillance of public security with a residence permit.

A preventive tool is the detection of suspected terrorist movements and the sharing of information between states. An important point also concerns the acquisition and transfer on a bilateral and multilateral basis of information from security services. Also in the decree measures are added on the protection and activities of intelligence agencies, there being able to carry out interviews with detained or interned individuals.

The national anti-mafia prosecutor is given the task of coordinating investigations at national level concerning criminal proceedings and those concerning prevention in matters concerning terrorism.