ANIA and ARMA foundation initiative on the most dangerous states

One hundred accidents and 5 died every day, for a total of 1761 victims in one year (2012). The extra-urban roads are confirmed as the most dangerous in Italy, with over 35 thousand accidents that cause more than 48,2% of the total deaths from road accidents in Italy.

To stem this phenomenon and make some of the main Italian arteries safer, the ANIA foundation for road safety and the Carabinieri Corps launched the third edition of the "Adotta una strada" project.

Part this week and will last two months, a targeted control activity on six of the most dangerous Italian state roads: the Via Aurelia, the Via Emilia, the Adriatica state road, the Stelvio state road, the Via Casilina and the Jonica state road. On these arteries the carabinieri will intensify patrols, above all at the so-called black points, considering the most dangerous and risky accidents, also reported through the project of the ANIA foundation.

Thanks to the support of the stations of the Weapon and the mobile radio units - competent in the control services in favor of ordinary roads (urban and extra-urban) for a total of 648.000 Km - an educational action will be carried out centered on the respect of the rules of the road. Two areas on which military action will be concentrated: driving while intoxicated and transporting minors by car. To facilitate and increase controls, the ANIA foundation has donated to the Carabinieri Corps instruments for the detection of blood alcohol levels: professional breathalyzers, disposable mouthpieces and breathalyzer precursors will enrich the endowment of carabinieri patrols. At the end of each check, motorists found to be sober will be given a disposable breathalyzer to measure their alcohol status independently. In addition, the carabinieri will also focus on one of the biggest problems related to road safety: the transport of minors by car. They will do it by distributing a flyer that summarizes and describes the articles of the road code on the subject, with a focus on sanctions in case of transgression. 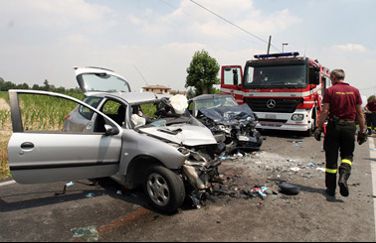 "In previous editions of this initiative - explained the general secretary of the ANIA foundation, Umberto Guidoni - we obtained a great consensus from motorists, with comforting results in terms of reducing accidents, deaths and injuries on the routes involved in the increase in controls. To increase our range of action, we have decided to pay great attention to the transport of children by car. Road accidents are the leading cause of death for children between 0 and 13 years. Carrying them correctly in the car means worrying about their safety. It is essential that parents understand that the seat and all the restraints required by law are fundamental for the protection of minors transported by car and the rules of the road code are inspired by the principle of protection. Also in this third edition, the main purpose of "Adopt a road" is to make citizens aware of the correct driving behavior, given that over 80% of road accidents are caused by human errors ".