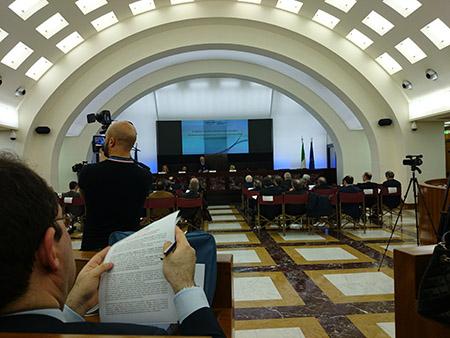 "Italians trust our Intelligence. Six out of ten citizens express themselves in this sense and believe that we need to know more and better the role of the Information System for the Security of the Republic in the fight against threats of terrorism and lone wolves, cyberwar and attacks on the know-how of our companies " .

This is what emerges from the Eurispes survey on Intelligence, which confirms the growing attention of citizens, and young people in particular, to the tasks and work of the Intelligence Sub-Fund.

The Intelligence and Society Report: investigation of the role and image of the Information System for the Republic's security in the public opinion (PDF 2,6 MB) - an initiative desired and conducted by the Research Institute on the basis of the data collected on the occasion of the surveys conducted for the 2015 Italy Report - was presented in Rome, the 26 in March, at the Multipurpose Hall of the Council Presidency. To illustrate the main results of the Report were Gian Maria Fara, President of Eurispes, Paolo De Nardis, Professor of Sociology at the 'Sapienza' University of Rome and Roberto De Vita, Head of the Eurispes Security Observatory.

The meeting was attended by Ambassador Giampiero Massolo, Director General of DIS and Copasir President, Giacomo Stucchi. To moderate the meeting, the journalist of Sky, Francesca De Sanctis.

In Sala, in addition to the top of the Intelligence Compartment - including the Director of AISE, Alberto Manenti and the Director of AISI, Arturo Esposito - the parliamentarians members of Copasir, Bruno Marton and Rocco Crimi, the Chief of Staff of the Aeronautica Militare, Pasquale Preziosa, magistrate Gian Carlo Caselli, military and civil authorities, university professors, journalists and representatives of civil society.

"The level of satisfaction achieved by the Intelligence in public opinion marks a very important leap forward, with very interesting data for sociologists - said Eurispes president, Gian Maria Fara - the vast majority of citizens indicate a widespread and high consensus rate for National Intelligence. The excellent result achieved is certainly also influenced by recent events. The threats deriving from a difficult international situation and the emergence of new phenomena of terrorism - from the molecular one to the threats of the 'black men' of IS - are certainly directing the citizens towards a culture of shared security, greater reflection the role that our Services have been able to carve out internationally and the awareness of how valuable their work is, even if scarcely visible, for the protection and defense of the country ".

"The opening of the company - remarked Fara - is the real turning point of the 2.0 Intelligence. Citizens, moreover, recognize that this is a fundamental sector for our country, not only for national security but for the protection of businesses. The confidence gained in the field is the path that the Intelligence Compartment is going through. The Eurispes - he underlined - wanted to conduct this research independently and without any institutional mandate, to help strengthen the message and the value of shared security, carried out by Italian Intelligence, which must be known more and better " .

In his contribution to the work, Ambassador Massolo, called to the speakers' table for a greeting address after the presentation of the Eurispes report, underlined how "the survey numbers reward the opening operation" conducted by Italian Intelligence. We - said the Director General of DIS - we tried to explain to the public that we operate in the legal perimeter that is assigned to us and always in the interests of citizens ". "This effort has been well understood", added Massolo, reiterating that "Intelligence gains us to be better known because the unconventional instrument operates in the interests of the country and the citizens".

The Director General of the DIS has therefore declined "four verbs to infinity: open, communicate, involve and guarantee". As for the first point, the opening to society, the ambassador stressed that "the 90% of intelligence activity is visible and there are no mysteries. The remaining 10%, instead, consists of the intelligence operations, which are not going to tell the passer-by. There is a dutiful privacy related to security but the comparison with Copasir is constant and productive ". The opening up of the company, Massolo explained, takes place "thanks to the initiatives of the Training School of the Republic's Security System, to the website and to the" Intelligence live "roadshow in Italian universities. A path that allows us to better understand the interest of so many young people for our world but above all to establish synergies to build together with the research and excellence centers a culture of shared security ".

The second word is to communicate: "We are suppliers of security - the ambassador Massolo has marked - we can and we must lengthen the field and interface more and more with civil society". Hence the third point, "involve". Create synergies to "promote greater social awareness. Security - he remarked - is never a zero-sum game: it is a joint venture ". This is why we expand and refine the 'core business' of the Intelligence which works to prevent cyber attacks and financial espionage ", focusing on the" innovation of technological tools and human intelligence ".

The fourth verb is: to guarantee. "The motto of Italian intelligence - recalled Ambassador Massolo - is: security and freedom. The challenge with which we are confronted is carried on with ever increasing technological refinement and expertise. We can not fail to respond with an equal updating, including technology and training. What the government is doing with the terrorism decree, I think goes in this direction ". Asked by the Sky journalist on the risk of terrorism, the Director General of Dis replied: "To threaten us is a point-like galaxy. The task of the Intelligence is to unite all the dots because the image of this threat emerges. Therefore - continued Ambassador Massolo - it is not a question of lowering a gate but of tightening the meshes of the network as much as possible "against any danger and asymmetric threat.

For his part, the president of Copasir, Giacomo Stucchi, spoke of "positive data highlighted by the Eurispes, to be read carefully in light of the history of our country and of the Copernican revolution that took place in the Sub-Fund with the reform of the 2007". "At Intelligence - he added - we need more resources, both human and technological: there are no interceptions with the letter 22 Olivetti, when on the other side we have those who do one hundred thousand tweets a day". "We are thinking - continued the president of the Parliamentary Committee for the security of the Republic - to a further coupon of the 124 law of the 2007 reform of services, to improve the performance of the Intelligence and provide more control powers for Copasir". "To face the new challenges - Stucchi stressed - we must work together. And today we are working at our best ".

The results of this survey, underlined Roberto De Vita, photograph an "Intelligence Community more open to an osmotic relationship with the outside world. On this path, dialogue with universities and research centers helps to make people understand that Intelligence is the first of the instruments of democracy ".

The report produced by Eurispes indicates that the channels through which public opinion is most often informed and informed about the work and activities of our Intelligence is television (35,5%). They are followed by newspapers and magazines (17,4%), information on the Web (13,9%) and radio programming (13,6%). Minority is the share of those who have collected information or news on the Intelligence through the deepening and reading of books or essays. There is no lack of those who deal with the subject privately in conversations with friends or acquaintances "The 31% of respondents - continues Eurispes - believes that the Services work behind the scenes to ensure the safety of citizens and the 17,7% states that their work is poorly considered, despite being very important. Starting from the importance of the activities carried out in defense of national security, the belief that this is a fundamental sector for our country (24,2%) and the desire to be informed about everything (29%) are the reasons why such arguments should find a wider space and a greater representation on the media. However, those who have no interest in the subject (7,1%) are not lacking and therefore do not think they should ask for more detailed information ".

"The opening of the company - concludes the Eurispes study - is the turning point of the new XnumX Intelligence season. Also thanks to the reform of the 2.0, the 'social usability' of the Intelligence was discovered, perceived as a service structure for the country and a laboratory of analysis for the political decision-maker ".