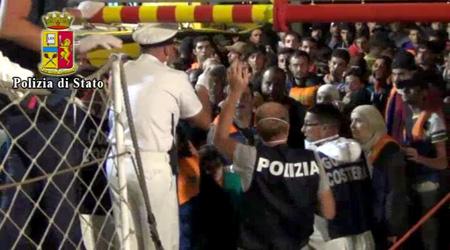 The state police of Ragusa arrested yesterday 7 Egyptian citizens, responsible for aiding and abetting illegal immigration. From investigations carried out, the police found that the detainees had illegally entered Italy, evading border controls, altogether 295 migrants, of Syrian, Egyptian and Central African origins, of which almost 100 are children, many of whom are newborns.

An immigrant interviewed stated: "Through Facebook, and precisely on a page dedicated to Syrian refugees in the world, I learned that there was the possibility of illegally reaching Europe, therefore through the social network, I asked for the number of phone to contact them, and I was provided. On July 12 I called that number and asked the person who answered the way for the crossing: we needed 2,700 US dollars per person and that the children were included in the price. The same man told me that the checks by the Egyptian police were pressing and that he would be made to feel at the right moment ".

After the arrest of the 7 scafisti, during the night, in anticipation of a possible repatriation, there was a revolt of the Egyptians at the CPSA (Center of First Aid and Reception) of Pozzallo (RA), destroying glass windows and carrying out acts of vandalism to the structure. In the early hours of yesterday, the police were able to put the situation back under control and 50 Egyptians, including the smugglers, were repatriated and handed over to the Egyptian police.

To date, only in the 2014 has the state police arrested 87 scafisti and numerous collaborative activities are underway with the other Sicilian police stations (coordinated by the central operational service), in order to allow informative exchanges useful to manage investigations into the traffic of migrants from the coasts of northern Africa to the Italian ones.