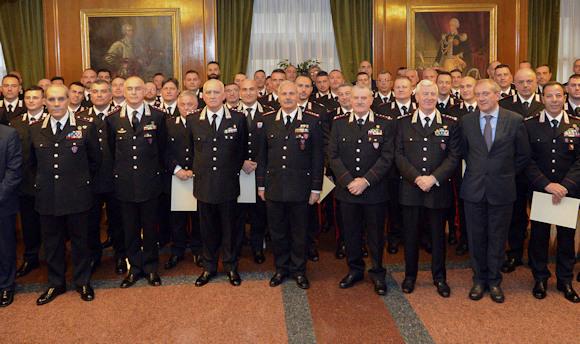 Yesterday morning, the General Commander of the Carabinieri Corps Tullio Del Sette met 52 military personnel from all over the country who have distinguished themselves in their daily service activities.

During the meeting, which took place in Representative Room of the General Command of the Carabinieri, in the presence of the leaders of the Arma and the General Staff, as well as representatives of the military representation, General Del Sette handed over to the staff the simple and solemn praises for the numerous acts of valor accomplished with generosity and enthusiasm, often at the risk of the same physical safety.

On that occasion, the commander general underlined the exemplary altruism demonstrated by the soldiers rewarded with these words:

"Today we reward behaviors that do honor to you, to the departments of belonging and to the weapon as a whole - said General Del Sette addressing the winners -It is thanks to people like you, in fact, that the Arma dei Carabinieri has become a fundamental institution, the most appreciated in our country and abroad. You represent the Carabiniere better than anyone. Why a Carabiniere must be such every day, knowing how to do even exceptional things, faithful to the oath given, with honor and loyalty to the Institution and Institutions".