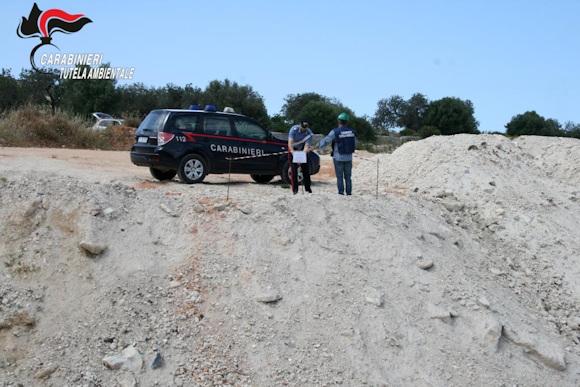 In the follow-up of the investigations initiated in the month of April, in the Comiso area, the Carabinieri of the NOE of Catania, at the conclusion of a targeted inspection activity in the waste management sector, planned at national level by the Environmental Protection Carabinieri Command, found and placed under seizure of a maxi illegal dump of inert materials in an area subject to landscape restrictions in the Muraglia di Comiso area.

According to initial surveys, this landfill was found to have an extension of more than 3.000 sqm. and a height development of approximately 15 m. The illegal conferment, certainly of the course of the last few years, and the consequent overflow, of over 45.000 mc was therefore estimated. of aggregates and various cementitious materials.

From the first verifications it emerged that the management of the landfill was operated in a totally abusive manner, in the absence of any authorization in this regard.

On site he was called to intervene by the ARPA staff of Ragusa who carried out the first samplings of the materials found in order to ascertain the exact type.

The area in question and all the waste present have been seized.

The provision was validated by the Judge of the Court of Ragusa on a parallel request by the magistrate holding the investigation file.

The already very heavy picture of environmental damage deriving from the illegal activities carried out in Muraglia continues to worsen. After the abusive maxi quarry seized last April, part of the enormous excavation produced was today used as an illegal dump, with yet another serious damage to the environment and the landscape heritage of the area.

The owners of the area have been reported to the Judicial Authority for the management of unauthorized waste - Abusive landfill -, execution of works on land with landscape restrictions without the required authorization for disfigurement and destruction of natural beauty.