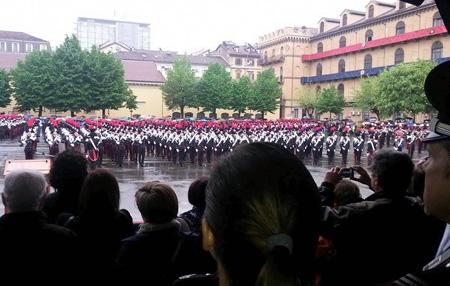 The April mornings in Turin are an unnerving game between the citizens and the bizarre climate that characterizes the city. On the morning of the last day of the month the weather proved to be threatening, an icy wind and a downpour baptized the city just before the 8.

At the same time, while the Turinese fought with umbrellas hoping to arrive unharmed at work, the day of the Carabinieri students began at the Caserma Cernaia, a special day for them and for families from all over Italy.

In this leaden day of a fugitive spring, he swears the 131 ° Allievi Carabinieri course, which was named after MOVM Raffaele Porrani.

The very young carabiniere was assigned to a mobile column engaged in counter-guerrilla actions in the 1943. Taking part in numerous fights, he was wounded by a firearm, refused all aid and continued to fight. Captured together with his companions, despite the advice to remove the carabiniere's tycoons to avoid sure retaliation, he wanted to preserve them and did not hesitate to declare his belonging to the weapon. Sentenced to death with the commander of the column, he showed unmovable pride and undaunted courage, refusing any compromise to the laws of military honor and complete dedication to his country.

The reason why the Carabiniere Porrani was awarded the gold medal seems like a story from another era, but like any true example, its history contains a great teaching for young students.

The police uniform never takes off, even when you do not wear it you have sewn inside, the carabiniere must be intact, respect the oath that has lent to the Republic but above all must be the guardian of that order in which to each citizen are granted the fundamental rights that make him a free man.

The oath was not just turning one's life to the Italian Republic but it was a moment of reflection for these young compatriots, a reconfirmation of their being carabinieri, with the affixing of the frogs on the uniforms.

This simple gesture was made for each of the students by a member of their families, the clear emotion of the fathers and mothers who, with a trembling hand, placed on their daughter's lap the much-awaited frogs.

In the deployment there are 34 women, one of which is almost in front of the stage where I find myself to observe the ceremony.

The young man's father has eyes full of tears, a red face of someone who can barely contain his emotions, grazes his daughter's face with his fingers and smiles at him like only a parent full of pride can do.

A very natural gesture of a boundless sweetness, snatches a smile from the young student who, nodding, dismisses her father and then returns to the seriousness that her work entails, a high chin and a rifle on her shoulder. 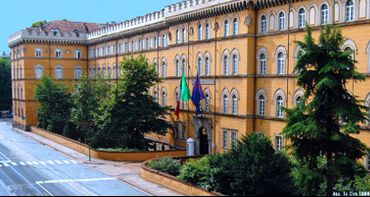 The ceremony to which hundreds of people attend is not a disruptive example of latent militarism, there is no ostentation of force or wanting to command. But there is so much pride and desire to do well, desire to be a reference for citizens, desire to be one of those stories that still honor the legacy of our country, far from those stories of malfeasance that we like so much lately.

These guys are the face of our redemption, they are the ones who will do well and who still believe in a better country thanks to their contribution.

Together with the departments deployed to share the rain and the incessant wind, there are the commander of the Carabinieri's Army Corps, general of the army corps Ugo Zottin and at his side very proud of his men the Colonel Franco Frasca commander of the School.

Behind the central stage, together with General Zottin and Colonel Frasca, under a big stage topped by a big tent we find to pay homage to the students and their families, most of the weapon associations of our country: Army, Guardia di Finance, State Police and State Forestry. They greet each other as retired Arma brothers. They huddle around the new generation so that the past is not forgotten. Being a carabiniere is also a question of traditions.

What we witness is an important ceremony, solemn but it is above all a party, where we find ourselves, we say goodbye is happy to belong to the same uniform and to be all under the same flag that dominates bathed in the courtyard of the barracks, that Italian.

Although I did not know anyone in the ranks of the oath, this welcoming atmosphere made me feel at home and take part in the party.

At the end of the ceremony, without an umbrella, I am going to cross the courtyard of the barracks in a pouring rain and doing the slalom between the relatives to reach the exit.

With a certain reluctance I am going to leave the only place left dry before I run into a wall of water that I would do without, feeling a little boy knocking on my shoulder asks me if I want to be accompanied to the main door with the umbrella, I willingly accept and walking says to me "My brother saw her without an umbrella and asked me to accompany her!".

Brought to safety by a carabiniere's brother on the day of his oath. A nice way to start a long career I hope.