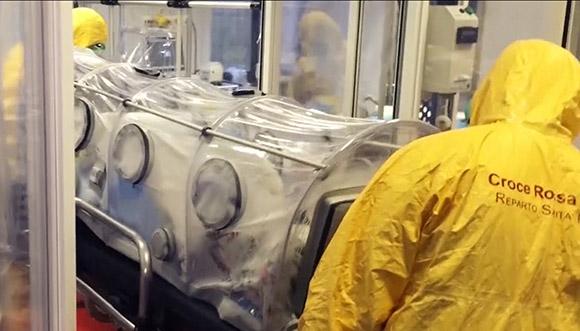 A sanitary ring, a model for efficacy and for the immediate response of the National Health Service, invested in recent years more and more often by relevant epidemic events with potentially serious consequences. A system of three structures - the Garibaldi Hospital, the Port and the Fontanarossa Airport - capable of dealing immediately with those patients who present the symptoms of serious infectious-diffusive pathologies and to isolate, with sophisticated laboratory investigations, the infecting agent . A project that sees Catania - already identified by the OCCAM (Observatory on Digital Communication of the UN) for the Mediterranean telemedicine - as a health center in Southern Italy for infectious diseases.

A need to respond promptly and effectively to risks to public health and to health emergencies of national interest, through the health ring, dictated both by the continuous flows of migrants, which the Navy constantly deals with in the "first mile" and the Coast Guard, supported in this by associations such as, for example, the Red Cross, 118 and volunteer nurses, and by the flow of passengers, about one million, which pass through the Fontanarossa Airport each year.

"Catania Airport is the most important national airport in the South. - affirmed Claudio Pulvirenti, director of the USMAF (Office of Maritime and Air Health) of Catania - We have focused our attention on the prevention and management of the patient, realizing within the airport system, together with the SAC, a structure able to manage the passenger who presents signs and symptoms of an infectious-diffusive disease and to prevent contagion and propagation in our territory ".

"The Air Force has always been interested in transporting sick people in flight, transport in Alto Biocontentimento is a super specialty. - declared Piervalerio Manfroni, general head of the Air Service of the Italian Air Force - In flight, the infected person is a problem for himself, for the crew and for those who assist him, being the environment confined. For this reason, for more than 10 years, we have followed this transport system, conceived by an English engineer. We have learned from them and have succeeded over the years in building tools, thanks also to small and medium Italian industry. Today, we are the first in Europe and in the rest of the world: now it is the Americans and the English who come to us to learn the system. Italy has proved to be an excellence. The progress is in the realization of a variable geometry stretcher and in this we are working with different Italian regions ”.

The sanitary ring is divided into three structures: theHigh Bioconcentration Unit - carried out at the emergency department of the Garibaldi Hospital - and made up of a mobile structure of level BSL3 (tuberculosis, SARS, rabies, encephalitis, yellow fever, brucellosis, Nile virus, leishmaniasis) decontaminated, composed of a metal support structure, from a transparent inner shell in highly resistant PVC, sealed to the floor and equipped with a safe entry / exit module and a pressurization filter system, which guarantees a high level of air flow inside the chamber.

In the Port of Catania, on the other hand, the USMAF together with the Italian Red Cross have installed the sanitary stations assigned to the reception of migrants and where the project "Diagnosis on the quay" takes place, thanks to which, within two hours , it is possible to formulate a diagnosis of certainty on the presence or absence of a tuberculosis infection in migrants arriving at the port.

The last structure is the Health Canal created by the SAC - Catania Airport Company - at Fontanarossa Airport. The structure created in Airside, is allocated away from the terminal and used for the clinical control of passengers coming from countries affected by health measures. Its use is triggered if you were in the presence of a sick person on board the aircraft, coming from endemic areas, or of any passengers presenting signs and / or symptoms of diffusive infectious diseases.

Should the traveler be affected by BSL3 infectious-diffusive pathologies, he would be admitted to the High Biocontent containment of the Garibaldi Hospital in Catania. While, if he was suffering from a pathology classified BSL4 - hemorrhagic fevers, smallpox, Lassa Virus, Ebola - with the specialized means of High Biocontent of the Air Force would be immediately transferred to the Hospitals of national reference: the Spallanzani Institute of Rome or the Sack of Milan.

In the health channelControl Area it is divided into three zones, characterized by three entrances and three paths - green, yellow and red - easily accessible for emergency vehicles and structured so as to maintain the separation between passengers. All transports are insured in high bio-containment by the Italian Red Cross through the IsoArk N36 stretcher or by the dedicated ambulance car.