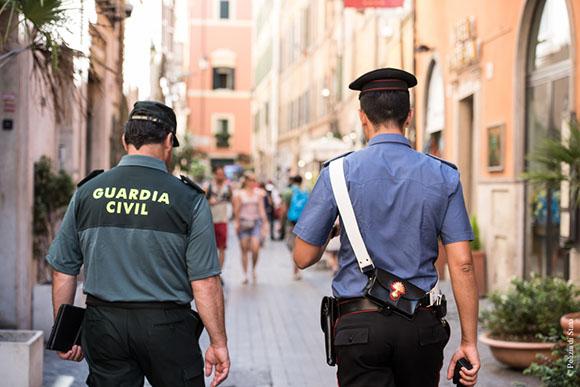 Four operators of the Italian State Police and four soldiers of the Carabinieri will carry out the patrol service during the summer along with Spanish agents in areas of great tourist flow in Madrid and in the islands of Tenerife, Fuerteventura, Ibiza and Formentera, while four agents of the Spanish Cuerpo Nacional de Policía and three of the Guardia Civil will travel to Italy, where with the same goal they will patrol the cities of Rome, Naples, Florence and Venice.

As a continuation of the activities started in the summer 2014 in the context of the "Comisarías Conjuntas" project, and in consideration of the good operational results and the raising of the level of perception of security that this bilateral police collaboration has obtained, starting from 2 July agents of the Spanish Cuerpo Nacional de Policía and of the Italian State Police and agents of the Spanish Civil Guard and soldiers of the Carabinieri will carry out joint service to strengthen assistance to tourists in the cities indicated above.

The agents will serve with their own uniform of order with the main purpose of speeding up the exchange of information between police bodies and facilitating contacts between tourists and local law enforcement, as well as with the diplomatic and consular authorities of the two countries.

Italian State Police officers will be present at points of special tourist importance in the cities of Madrid (from 1 to July 30) and Tenerife (from 1 to August 30). For their part, the four members of the Carabinieri will remain two months, between 1 July and 31 August, on the islands of Fuerteventura, Ibiza and Formentera (2 unit). Their functions will range from patrols on foot or by vehicle to assistance to victims of crime, crime prevention and assistance in the formalization of complaints.

In the same periods in which the State Police and the Carabinieri Corps will serve in Spain, agents of the Cuerpo Nacional de Policía, two per fortnight in the cities of Rome (from 1 to August 30) and Naples (from 1 to July 30) and the Guardia Civil, for two months (from 1 July to 31 August) in the cities of Florence, Venice and Rome, will perform the same functions.

The aim is to be present in those places characterized by a greater presence of tourists to offer them full assistance in the sphere of city security with police officers who speak their mother tongue and know the legal procedures of both countries.