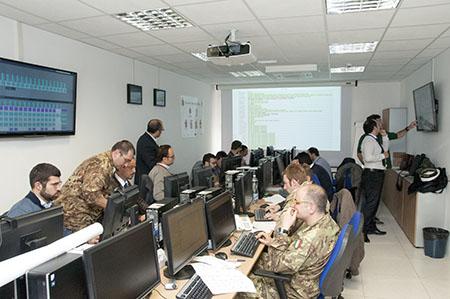 Cyber ​​attacks, hacking, network security threats and related countermeasures have kept 21 from NATO's 24 experts and military specialists who took part in the cyber-defense exercise "Locked Shields 400" , organized by the NATO Cooperative Cyber ​​Defense Center of Excellence in Tallinn (Estonia) and directed, for Italy, by the C2015 Defense Command with the contribution of the academic world and the industry of the sector.

Conceived in the framework of multinational cooperation in the field of cyber defense, the "Locked Shields 2015" is traditionally aimed at training and coordination of sector specialists - civil and military - in the management of information technology emergencies, with particular attention to the identification and neutralization of large-scale cyber attacks.

Now in its sixth edition, this year saw the participation of 16 teams - each of them operating from their own State - and of the NATO Computer Incident Response Capability Technical Center (NCIRC - TC).

Set in a fictitious crisis scenario - in this case, a North-European member of NATO and the EU, the scene of cyber and conventional attacks - the "Locked Shields 2015" saw the deployment and deployment of teams of specialists in the emergency response computer to protect the computer networks to control remote piloted aircraft.

In particular, the exercise consisted in the management, by teams of rapid reaction, of informatic emergencies of various kinds, such as disturbing activities, hacking and their own attacks on the security of military and civil networks, with many implications of nature legal and media.

The exercise - the fourth of this typology in which Italy participates - has provided an opportunity to deepen and discuss a topic, that of cyber security, which has long been one of the priorities among the countries of the Euro-Atlantic area , committed to ensuring an integrated and adequate response to a threat, that of information technology, increasingly diversified and sophisticated.