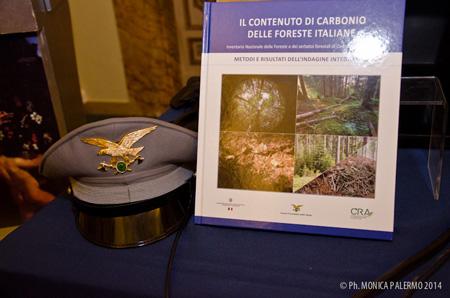 Estimates and numbers on the activity carried out by the State Forestry Corps for the national inventory of forests and carbon forest reservoirs, this is the subject of the press conference held yesterday at Palazzo Rospigliosi.

The conference was attended by Cesare Patrone (in the photo), head of the state forestry body, Roberto Moncalvo, president of Coldiretti, Elisabetta Lupotto, director of the agronomy, forest and territory department of the CRA (Council for Research and Experimentation in Agriculture), Nazario Palmieri, moderator of the event and head of the forestry, environmental and forestry policy department, Enrico Pompei, first leader of the State Forestry Corps, Patrizia Gasparini and Lucio Di Cosmo of the CRA-MPF, Angelo Mariano and Nicolò Giordano, officials of the body State Forest.

During the meeting the "Forest Map of the Kingdom of Italy of 1936" was presented in vector format, in collaboration with the CFS - Environmental Monitoring Office and the CRA - MPF to support the technical-scientific and development activity in the sector monitoring of forest resources.

The Forest Charter of the Kingdom of Italy was the first forest mapping project applied throughout the national territory. The cartographic survey of Italian forests, completed in the 1936, was entrusted to the forest militia that operated through field surveys conducted with expeditious methods.

The volume "The carbon content of Italian forests - INFC 2005" was also presented, produced by the State Forestry Corps and the Council for Research and Experimentation in Agriculture (CRA-MPF).

The dott. Nazario Palmieri, at the beginning, highlighted the importance of Italian forests, in continuous growth, in 15 years have increased by 600.000 hectares and for this reason "we need to encourage this widespread awareness, so that society, the community, can then translate it into proactive actions for the protection of this heritage ".

The importance of forests and forests

But why are forests and forests important? The dott. Enrico Pompei: "Forests represent more than a third of the national surface, and the benefits they give to the community are important, such as the preservation of biodiversity, the regulation of water, the production of oxygen and timber. Another fundamental aspect is absorption. of carbon, and therefore the mitigation of climate change From this point of view, Italian forests have enabled Italy to achieve an excellent result with regard to the Kyoto protocol commitments (international environmental treaty, entered into force by the 2005, to which more than 180 countries have adhered, ed), and this continuous growth of our forests, gives us good hope from this point of view: the commitment that must be taken is that of a very correct management, to protect these new woods. It is enough to remember - continues Dr. Pompei - that in the last 10 years we have passed from 10 million and a half to 11 million hectares, and these woods has need to be managed, to be cultivated, and to have an active sustainable forest management ".

The impact of forest fires

But what is the negative impact of forest fires, how is the carbon balance affected? The dott. Luciano Sammarone of the State Forestry Corps: "Fires destroy forests. From a landscape point of view they also alter the landscape in a decisive and prolonged manner, have a negative effect on the ecosystem and on the soil because in many cases they accelerate the detection of the part superficial, so thousands of years of transformation are eliminated As far as the carbon balance is concerned there is an immediate release of carbon dioxide, which is stored inside the wood and goes directly into the atmosphere, and this is an extremely negative element ".

Forests and forests are important for the economic and social development of the nation, and in this regard the head of the state forestry body argues that "there is a need for an environmental, agricultural and food protection structure that represents a world fundamental to our community, because in order to operate we must be culturally equipped, we need a body of protection, which is why I believe - continues Patrone - that we need a body of environmental protection, agriculture, food, even more strong".