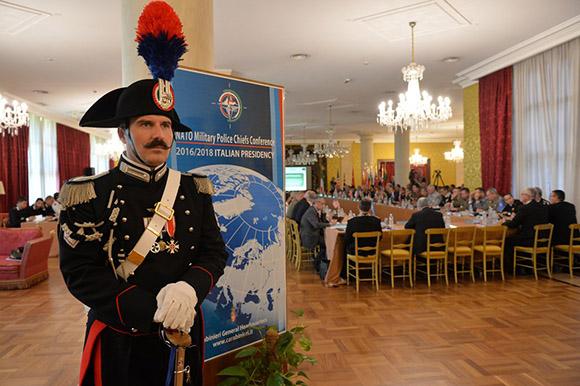 Today, in Rome, at the "Salvo D'Acquisto" barracks, the work of the "NATO Military Police Chiefs Conference" opened in Rome, informal meeting of Allied military police leaders. Attending the opening were the Chief of Defense, General Claudio Graziano, and the General Commander of the Carabinieri Army, Tullio Del Sette.

The conference's work, which will close on September 22, will be aimed at increasing cooperation on NATO's internal security, especially in the fight against terrorism. But not only because the conference will seek to find a general agreement to increase the budget of each country for the military police (MP from now on) so that it can support all activities and increase the training skills within the centers of excellence.

Also the exchange of information will be very important to give a complete and univocal view of the MP. To this end, based on the decisions taken at last year's conference in Canada, will be decided also some exercises to be carried out jointly among the various MPs of the members of the Atlantic Alliance. Countries, especially Italy and Canada, which are also involved in training some MPs of non-NATO nations, namely Iraq and Ukraine. This effort is necessary in order to create highly specialized police in order to guarantee security and stability, but this effort must be carried out jointly.

After the initial presentation of the conference, led by Italy as both host country and president of the NATO Military Police Committee (NATO MP Panel), the word was taken by General Graziano, who, after the ritual greetings, he spoke about the importance of the European scenario regarding the MP. "Terrorism, immigration, competition between states, Russia's decisive behavior, criminal organizations and the instability of states", These are the starting points from which this conference has to move for the CSMD. Because without the cooperation of all the states present, indeed some non-embedded in NATO, such as Ukraine, Qatar, Armenia and Georgia, it will be difficult to achieve the stabilization of Middle Eastern and African countries, which contribute to the issues that is living in Europe. In this regard, it is important, Graziano recalled: "Training and support in operations that are carried out to support weak government in the area".

Libya's immigration and instability are worrying for Europe. The theme of illegal immigration was central to Graziano's speech, because "the problem of migrants can not be stopped with the walls. It's an unstoppable phenomenon, but not unmanageable". How to check it? Graziano does not say it, but he let it be clear that NATO, like Italy, has all the cards to do so, especially if everyone is working together for this purpose.

The collaboration is therefore at the base of everything and, above all, of the conference, which will have to lay the foundations for extending the current cooperation between MPs also abroad, in the context of missions under the aegis of NATO. One thing the Carabinieri are already doing, assured Graziano, trying to stabilize the countries where problems arise as much as possible. "Find a common path to follow thanks to the experience gained in the field, in order to respond correctly to the challenges of internal security"This is the final address given by the Chief of Defense.

A desirable recommendation for NATO, which faces challenges which it has not yet been able to give a firm and unambiguous answer.

The NOE Carabinieri of Naples, during the activities aimed at combating environmental crimes related to the cycle ...
146
Read