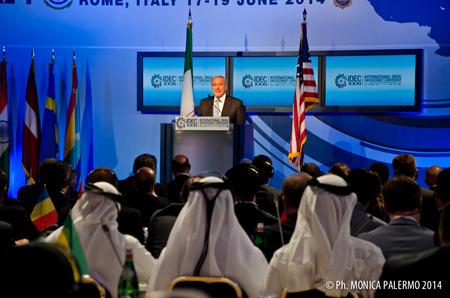 The XXXI IDEC (International Drug Enforcement Conference) ended on Thursday, the main theme of which was international cooperation in the fight against drug trafficking.

The senate president stressed that "the economic recession of the last few years has further consolidated the criminal power: thanks to the ample availability of liquidity and in contributing to the aggravation of the credit crunch for companies, drug traffickers and other companies criminals have increased their investments in legal economies all over the world, including acquiring thousands of failing businesses, with the result of strengthening dependency and loyalty to the mafias of the poorest and most fragile areas, of legitimizing entry into the legal circuits and laundering of illicit capital, of altering the mechanisms of competition and thus irremediably polluting the global productive and financial system. "

Addressing the delegates attending the XXXI edition of the International Drug Enforcement Conference: "I am well aware of the issues that this conference has treated - added the president - so much so that on my first and only day as a simple senator, the second day I was elected president of the Senate and as such I can no longer enter into the merits of political issues, I have presented a bill on economic crime, corruption and corporate offenses to encourage financial investigations into illicit capital, I am convinced that in interactions between drug trafficking, crime, economics and politics, the greatest threat to our future lies. "

He concluded the conference by emphasizing his commitment to the fight against drug trafficking: "I want to assure you that even today as Senate President I continue to believe in the same values ​​as always and that I consider the challenges you fight on the field as my most important responsibility and my greatest commitment. "

Finally he gave an appointment to the delegates to the XXXII IDEC conference that will take place next year in Colombia.