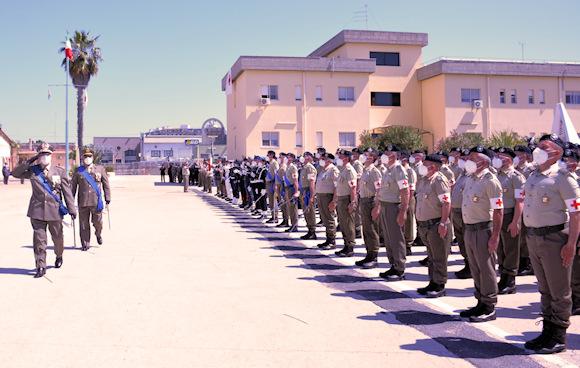 The solemn swearing-in ceremony of Sicilian personnel newly enlisted in the military corps of the Italian Red Cross took place on Monday 16 May, within the detachment of the Air Force of Syracuse.

After reviewing the deployment, accompanied by the commander of the mobilization center "Sicily", second lieutenant Gaetano Ricontati, General Lupini, calling the flag to himself, pronounced the formula of the oath which was echoed by the unanimous cry of the new volunteers. "With this moment of the highest symbolic and ethical value, you have become part of a large family, an international humanitarian association and an important auxiliary body of the Armed Forces" - greeted the Inspector General, addressing his new volunteers and the numerous families gathered around them.

The solemn ceremony was also attended by numerous civil, religious and military authorities including Major General Maurizio Angelo Scardino, military commander of the Army in Sicily, who, in his greeting speech, underlined "the daily commitment of the Red Cross alongside communities and people who are in a situation of vulnerability, both in times of war and in peace, in Italy and abroad".

The military body of the Italian Red Cross, auxiliary to the Armed Forces, is made up of a contingent of retired personnel, enrolled on a voluntary basis and highly specialized: doctors, psychologists, chemist-pharmacists, commissioners, accountants, nurses and rescuers. In their retired roles, the corps has about 17 members, who are periodically recalled for training purposes. The military corps in national and international emergency situations manages field hospitals, advanced medical facilities, mobile health and logistic units and NBCR decontamination units. It is currently organized territorially in a national inspectoratein mobilization centersin training and promotional activities locally, in operational bases and multifunctional centers.