Barracks open to road safety, the project of the ANIA and Arma dei Carabinieri Foundation is under way 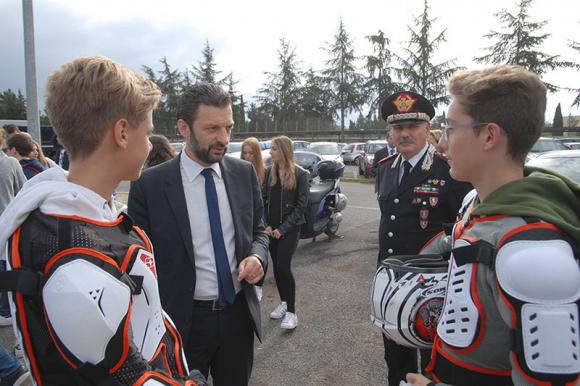 Fight the "road killers" through training for high school students. The 20 and 21 October held a stop at the Carabinieri "Palidoro" Specialized Mobile Command of Rome for the 2016 edition of "Barracks open to Road Safety", an initiative carried out by the ANIA Foundation in collaboration with the Arma dei Carabinieri. It is the third of five stages in the barracks of many Italian cities, in which over 800 students from 14 to 19 will be involved, who will be engaged in theoretical lessons held by the Carabinieri of the departments involved in road control, driving simulator tests and tests scooter practices on a circuit that will be built inside the selected barracks.

The project was born because road accidents are the leading cause of death among young people. In 2015 alone, according to provisional data released by Aci-Istat, one out of five road victims had fewer than 30 years: a total of 697 boys lost their lives due to road accidents. Particularly serious, then, is the situation of weak road users and, in particular, that involving motorcyclists: still in the 2015 were those who lost their lives on Italian roads.

Looking at the Municipality of Rome, in the 2015 the deaths in road accidents were 173.

«The latest data on road accidents involving young people - explains Umberto Guidoni, General Secretary of the ANIA Foundation - indicate a decrease in the number of victims under 30, despite the total number of road deaths increased after more than a decade of constant decline. This absolutely must not make us think that we have won the battle, but must push us to insist on training activities aimed at young people who, with figures in hand, are giving the desired results. For this reason we have decided to repeat the initiative "Open barracks for road safety", a perfect scheme of collaboration between insurance companies, law enforcement agencies, schools and families, who are involved in various ways on the road theme. Young people are the future of a country and it is inconceivable that they are decimated by road accidents at the rate of a victim every 12 hours.

After the launch in Reggio Calabria of the 13 and 14 October, the stop in Campobasso of 17 and 18 October and that of Rome of the 20 and 21, "Barracks open for road safety" will move Florence the 24 and 25 October to then end in Mestre the 27 and 28 October. In each city the event will last two days, during which training sessions will be organized that will involve 160 boys from the five upper middle school classes, divided into two groups. The educational program includes a theoretical training phase common to all and a practical training phase, which varies according to age. Students with driving license age B can practice driving simulators and learn how to react correctly in the event of aquaplaning, the sudden presence of an obstacle or understeer, but also to evaluate the negative effects of driving in an altered psychophysical state or distraction behind the wheel. For the younger ones, on the other hand, ANIA campus will be made available, a protected area where, followed by professional instructors from the Italian Motorcycle Federation, they will be able to learn which driving behaviors to take in order to travel on two wheels in complete safety and to adequately face the road hazards. Finally, for everyone, there will be the opportunity to closely observe the cars and motorcycles supplied to the Arma Radiomobile Units and the tools that are used daily by the Carabinieri in territorial control activities and to ensure road safety.

During the night, the carabinieri of the ROS and of the Provincial Command of Milan carried out an Ordinance of ...
1172
Read