Home News armed forces Safety Carabinieri and "Libera" together against the m ...

Carabinieri and "Libera" together against the mafias 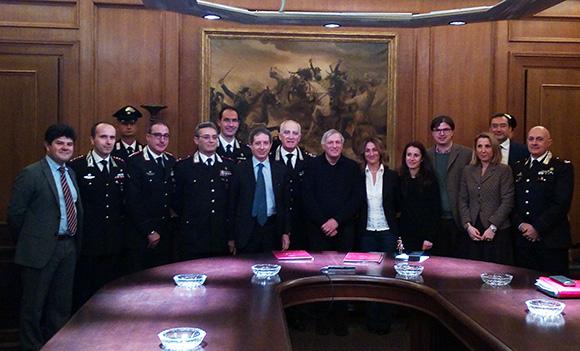 This morning at the general command of the Carabinieri, the general commander Tullio Del Sette and the president of the "Libera" association, Don Luigi Ciotti, signed a memorandum of understanding aimed at further developing the already fruitful relations of collaboration between the two organizations.

The purpose of the agreement is to promote joint activities aimed at spreading the culture of legality, especially among young people, and to combat the mafia-type associations in a synergistic way.

The agreement runs through two central nodes: the antimafia "of doing" and that of "knowledge".

The first involves cooperation between the ARMA and "Libera" on various points, first of all the proximity to the victims of crime and the security of confiscated assets. Antimafia "of doing" also means a direct contrast to organized crime, particularly in the environmental and health sectors, two sectors that are characterized by the relevant economic interests at stake, arousing the appetites of the mafias.

The weapon, with its own territorial articulations and special departments, especially the newly formed Unit Command for Forest, Environmental and Agribusiness Protection and Carabinieri Command for Health Protection, is able to intervene in those sectors in a timely manner to verify and investigate critical situations that will be reported by the “Libera” network in the area.

Antimafia "of knowledge" means to explore together the themes of the fight against the mafias and the aggression of illicitly accumulated assets, in the awareness that a thorough knowledge of these phenomena forms the basis for an effective counter-action.

The Weapon will involve the Institutes of Formation in the project, theHigher Institute of Investigative Techniques (ISTI) and representatives of the various Organizations dealing with the issues, while "Libera" will make its operators available for exchanges of experience and knowledge.

The anti-mafia "of knowledge" also includes the partnership with the Sports Center of the weapon, which will participate with the leading athletes in the initiatives organized by "Libera" to promote the values ​​of solidarity and commitment among students.

In the consideration that the promotion of values ​​also passes through the protection of Memory, the Weapon and "Free" will work closely together for the initiatives and events aimed at keeping alive the memory of those who sacrificed themselves in the fight against the mafias and, in particular, for the celebration of the "Day of remembrance and commitment in memory of the innocent victims of the mafias" organized by "Libera" every 21 March.