72 Anniversary of the Defense of Rome 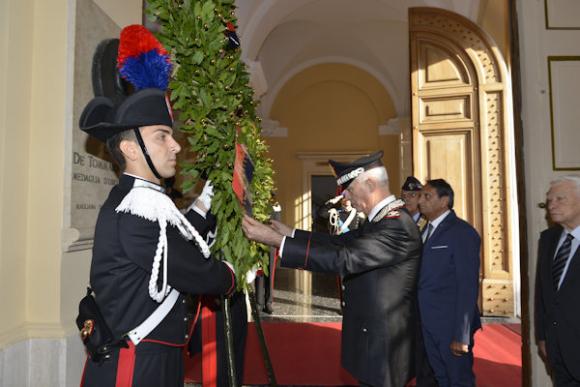 In today's morning, at the Legion of Students, on the occasion of the 72 Anniversary of the Defense of Rome, the general commander of the Arma Tullio Del Sette laid a laurel wreath on the plaque entitled to the head of MOVM "in memory" Orlando De Tommaso . At the commemoration were present the generals of civil servants in the capital, the head of SM, the deputy commander of the Schools of the Corps, and the presidents of group of gold medals for military valor,National Carabinieri Association and National Opera Assistance to Military Orphans Fallen Weapon, and a representation of Co.Ce.R.

The 8 September 1943, the Weapons of the Weapon were called to reinforce the area between the Magliana and Tor Sapienza neighborhoods where the paratroopers division of General Heindrich - moving from the area between Pratica di Mare and Ostia - was trying to penetrate the city. The 2 ° Carabinieri Student Battalion - composed of young students, newly promoted Carabinieri, and the officers and non-commissioned officers - participated together with the Grenadiers Division of Sardinia in the reconquest of an important stronghold on the Magliana, the last barrier before entering the capital.

The action was conducted with great ability, so much so that the enemy mass of 2.500 / 3.000 men was forced to go towards the Tiber abandoning the stronghold. Even after that action the carabinieri continued to fight by reconquering more land and making numerous prisoners. The presence in the area of ​​operations of the 2 ° student battalion lasted until the 19.30 of the September 9, when it was taken over by a contingent of 200 carabinieri of the Squadroni Group “Pastrengo”, on foot, who remained engaged in numerous clashes until the morning of 10 September , succeeding in making the German paratroopers desist and withdraw.
In the clash with the German paratroopers, seventeen were the fallen and forty-eight the wounded among officers, non-commissioned officers, pinned, carabinieri and students. A Gold Medal was awarded "to memory" to a Silver Medal of Valor, respectively, to the cap. Orlando De Tommaso and the Carabiniere Antonio Colagrossi, a Silver Medal of Military Valor to Living Vice-Brigadier Giuseppe Cerini, 3 Bronze Medals to the VM and 25 War Crosses to Military Valor.
Following that event the Barracks that host the Carabinieri Legion was named after the cap. Orlando De Tommaso, decorated with MOVM in memory with the following motivation: "Company Commander Carabinieri students committed to the defense of the capital, in the reconquest of an important stronghold that the German troops had wrested after bloody struggle in another Weapon Department, moved to attack with superb impetus, transfusing great enthusiasm and high fighting spirit in his very young soldiers: after three hours of harsh and alternating struggle, at a decisive moment in the fate of the battle, to drag his department nailed by enemy fire to a few hundred meters from the objective and throw it against the last obstacle, he did not hesitate to jump up into the open, on the furiously beaten road, consciously facing the supreme sacrifice. Hit to death by a burst of automatic weapon, he fell shouting to his police: 'Come in! Long live Italy '. His cry and his holocaust, galvanizing the department, led him impetuously, in a noble contest of heroism, to the reconquest of the objective ". Magliana di Roma, 9 September 1943.