162 Anniversary of the State Police 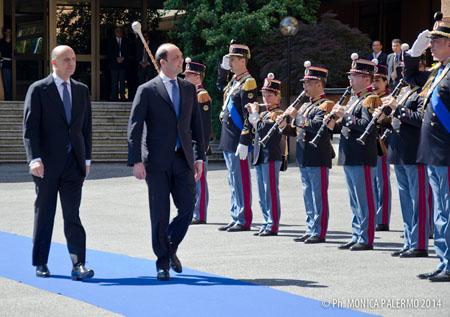 Moments of joy and emotion on Thursday during the celebration of the 162 anniversary of the State Police at the Police High School.

The police chief, the prefect Alessandro Pansa and the interior minister, Angelino Alfano, took the floor in front of the women and men in uniform, representing the various operational departments.

"The policemen are the true heroes of our times", with these words the prefect Pansa turned his gratitude to all the policemen and their actions.

A special thought went to the policemen who lost their lives wearing the uniform, like Massimo Impieri, a young street policeman who lost his life rescuing motorists to prevent them from incurring serious accidents. Another memory went to Luca Tanzi, who last November during the flood in Sardinia, finished the service with his colleagues, escorting an ambulance that did not know the paths devastated by the flood, his car sank on a bridge destroyed by the flood , further recollection went to Filippo Raciti and the wounded on the pitch during last Saturday's football match.

The prefect also congratulated the various departments for the positive budgets obtained during the year: to the traffic police for a decrease in reports of deceased and injured, to the railway police that increased the number of suspects and those arrested (especially in the 'scope of the activities carried out in contrast to the theft of copper), to the police increasingly active in the fight against child pornography and cyber attacks

Speaking of the immigration sector, the police chief pointed out that "the commitment of the State Police, which in recent months had to face the arrival of 12 migrants, compared to the 66.207 of the corresponding previous period, was remarkable.

In the field of combating trafficking in human beings, special investigative groups have been established, which have enabled the arrest of 263 smugglers and the seizure of 148 boats for abetting immigration. 2.320.247 residence permits were then issued. "The objectives achieved in the quality of training at all levels are also important." Our high school, where we are today, has just been awarded the certificate of compliance with the most rigorous international standard in quality theme. And soon we will adopt a permanent training program for all our operators ".

As regards public order, the prefect Pansa reiterates that "it is not easy to keep your nerve while together with insults of all kinds you are also targeted by paper bombs, firecrackers, rockets, stones and metal marbles, with the consequent risk to be seriously injured or even to lose life "and sets itself the goal" as general manager of public security and as chief of police, to continue to guarantee everyone the right to freely express their opinions, but respecting the equal the right of other citizens not to see their own assets and activities damaged and the right of public order operators not to risk their safety or career every day ".

Turning then to Angelino Alfano - "In conclusion, Mr. Minister: the rationalization of expenditure as well as the protection of the police officers are certainly very pressing needs, but I feel obliged to emphasize, as I have done since the beginning of my mandate, that the contractual block, the wage ceilings and failure to review careers are other urgent demands that I ask you to find adequate answers as soon as possible ".

Minister Alfano then took the floor, praising the work of women and men in uniform, and stressed that "there is no freedom if there is no security, and that security is one of the forms through which the freedom. There is no free people, if it is not free from fear and freedom from fear has in its defense our women and our men who every day are in our cities to defend freedom and even democracy ". Then addressing the mayor of Rome, who was present in the room, he stressed that "the right to personal safety of men and women in uniform, the right of the inhabitants of our cities to live peacefully in their own city, are equivalent, equivalent rights, placed on the same plan and - reiterates the minister - there is no right more right than others ".

Alfano then praised the commitment of the police unions for "responsible action to contain the discomforts, the responsible ability to channel the troubles of the staff, the desire for revenge of those who have been wronged or think they have suffered it, and this "It is the ability of our unions to channel them all on the side of proper institutional relations. I will certainly head the right claim to the reorganization of careers and to stop the wage block. He then concludes his speech by pointing out that" this country can be proud of the police, of his fallen, his women and his men on duty. Today we are proud of this pride in memory of this Police Day. "

At the end of the speeches the police chief and the minister conferred gold medals for civil merit and promotions.

First the gold medal for civil merit awarded to the flag of the State Police, for "the men and women of the State Police, giving proof of exemplary professional expertise, exceptional dedication and generous altruism, they have worked with single actions or collective carried out in places of mountain surveillance and in the event of natural disasters, in the rescue of people in danger ... ".

The Police Day ended in the afternoon with the changing of the guard at the Quirinale and with the concert of the band of the State Police.