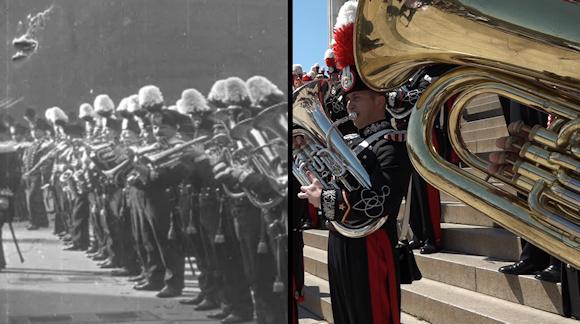 Already from the years of its foundation, the Corps of Carabinieri had its first trumpeters, the original nucleus of musicians who gradually, with subsequent rearrangements in the staff and in the equipment of instruments, gave life in 1862 to the "Fanfara".

Primo Fanfare leader area of Legion of Carabinieri students Luigi Cajoli was appointed marshal on horseback. On February 1, 1886, the Ministry of War, at the proposal of the general command of the weapon, approved a new organic formation for the Fanfare of the Pupils Legion, transferred the previous year from Turin to Rome, which was called "Musica" and Cajoli became chief-music with assignment to the category of officers with his appointment as second lieutenant. Maestro Cajoli is the author of one March of Ordinance of the Royal Carabinieri used as an ordinance march until 1929, when it was replaced by "La Fedelissima".

Finally, the "Band" derived from Music which was established on March 15, 1920, with the following dispatch from the Ministry of War "Instruction for the establishment and service of the Band of the Royal Carabinieri".

The musical body, which has thus become, even in official acts, Band of the weapon and no more than alone Pupils Legion, was divided into 70 performers, in addition to the master conductor. 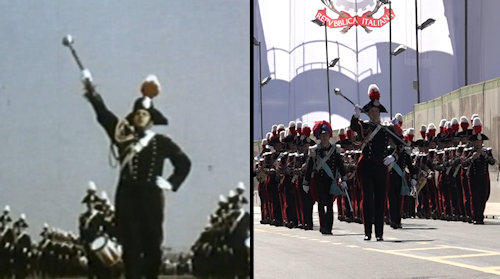 On October 30, 1920 the Band escorted the Flag of the Army to the Altare della Patria, which received, during a solemn ceremony, the first Gold Medal for Military Valor for the very valuable contribution to the victory of the arms of Italy (1915 -1918).

On 1 April 1925 he was succeeded by Maestro Luigi Cirenei, a pupil of Pietro Mascagni and a musician of rare sensitivity, who kept the tradition high and further raised the artistic level of the complex.

After the events of the Second World War, it was the Cyrene master himself, to whom we owe the composition of the Marcia d'Ordinanza of the Carabinieri, "La Fedelissima", with clear and solemn notes, to begin the reconstruction work. In 1947 the master Domenico Fantini took over and, continuing the work of Cyrenei with a deep and analytical work and with the fervent passion of a great artist, renewed and further enriched the heritage of the Band.

In 1972, maestro Fantini was succeeded by maestro Vincenzo Borgia, who, endowed with a marked artistic sensitivity, instilled in his orchestral music a new language in which all the most advanced elements of musical art came to life. The master Borgia is among other things the author of the Corazzieri Ordinary March "Fanfara Solenne".

Since 1 July 2000 the band has been directed by Maestro Massimo Martinelli. Today, with its 102 orchestras, hired and selected through public competitions, the Music Band of the Carabinieri it constitutes a complex structure capable of interpreting some of the most celebrated compositions. Its rich repertoire ranges from traditional military marches to classical pieces and to modern and contemporary ones.

The financiers of the Guardia di Finanza of La Spezia, the ROS Carabinieri, the officials of the local Customs Office, ...
366
Read