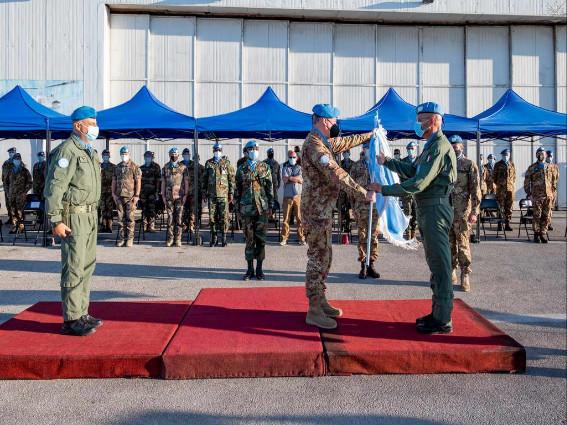 On 7 October, at the headquarters of the United Nations mission in Lebanon, pilot colonel Antonio Giovanni Villani handed over command of the Task Force ItalAir to pilot colonel Salvatore Jannella.

Before relinquishing command, after 13 months, Colonel Villani wanted to thank the men and women employed by him and highlighted that with their work they have contributed to the success of all the flight missions assigned to the Task Force.

In fact, thanks to their daily work, the flexibility and speed demonstrated since September 2020, ITALAIR conducted 1.350 missions for approximately 1.000 flight hours, carrying 2.700 passengers, carrying out 5 Medical Evacuations and 13 firefighting interventions. He then finished his speech by wishing the incoming commander a good job and a big good luck.

The gen. d. Stefano Del Col in his speech wanted to underline how ItalAir maintain a key role in carrying out the various tasks of Unifil and highlighted its ability to carry out all the flight missions assigned even in the most difficult conditions you never said that the mission could not be done.

He also thanked Colonel Villani for his excellent work and wished the best of luck to Colonel Jannella.

Brigadier General Stefano Lagorio also thanked Colonel Villani and his men and women for the professionalism with which they carried out the numerous flight missions and highlighted the cohesion of the unity that with sacrifice has given prestige to Italy on an international level. for over forty years.

ItalAir since its birth in the service of UNIFIL, July 1979, it has flown for 52.000 hours, has carried out more than 1.300 medical evacuation and has carried more than 180.000 passengers and continues to carry out, with AB 212 helicopters, all the flight missions that are carried out in the skies of the land of the cedars.

In the presence of the air squad general Nicola Lanza de Cristoforis, deputy commander of the Operational Command of ...
521
Read