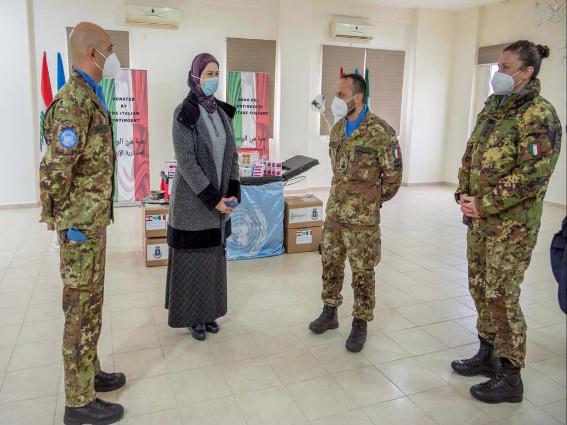 I Blue Helmets Italians of UNIFIL, responsible for the western sector of southern Lebanon (Sector West), based on the aircraft brigade Friuli, continue to help vulnerable sections of the population through donations of goods and materials.

In this context, in full compliance with the containment measures for COVID, a substantial donation of medicines was made in favor of children and young people of needy families in the municipality of Ayta Ash Sha'b who use the facilities of the social development center.

The donation, in which the local authorities and Lieutenant Colonel Alessio Panfoli participated, representing the commander of the Italian contingent, Brigadier General Stefano Lagorio, are part of a large donation made possible thanks to the solidarity and collaboration shown by the Municipality of Monte Roberto (AN) and some organizations and companies in the Marche region that supported the initiatives promoted for Lebanon by the aircraft brigade Friuli.

The director of the center, Dr. Siham Sdroubi, the local authorities intervened and the Lebanese families who use the health services offered by the social development center of the municipality of Ayta Ash Sha'b, in the extreme south of Lebanon, during the donation, demonstrated a deep sense of gratitude towards the contingent and the Italian population.

In her speech of thanks, the director wanted to highlight the close link that has been established for years between the local population and the Italian contingent, and the attention that the latter reserves to the health of minorities and vulnerable groups.

The cell Civil Military Cooperation di Sector West (formed by soldiers from the CIMIC unit of Motta di Livenza), organized the storage, transport and subsequent distribution of medicines and materials in Lebanese territory.

I Blue Helmets Italians, in addition to supporting the Lebanese community, heavily affected by the current serious crisis, continue to carry out operations to control the territory and cooperate with the Lebanese Armed Forces, thus contributing to the fulfillment of the UNIFIL mission assigned by United Nations Resolution 1701.

The frigate Carlo Bergamini returned to Taranto on 2 July at the end of a long period of assignment ...
190
Read

The medical support activities (MEDICAL CARE) that the Italian contingent in Lebanon are carrying out in ...
47
Read