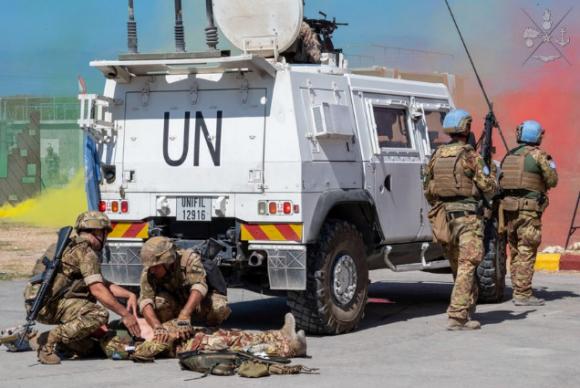 In recent days, Italian and Korean Blue Helmets and soldiers of the Lebanese Armed Forces (LAF) concluded a joint training cycle in the training area of ​​Tire, with the aim of refining the technical tactical procedures and increasing interoperability in the field. United Nations Interim Force in Lebanon (UNIFIL) and international.

The 5-day training cycle (June 27 - July 1) had as its predominant theme the close combat in the urban area and the related medical support.

On the final day, a live exercise was conducted in which the simulation system was used Simunition, set in an urban setting in which the UNIFIL and LAF forces acted jointly and synergistically to free some hostages, confronting and putting into practice what they had learned and refined in the previous days.

The training session ended with the delivery of the certificates to the Lebanese colleagues by the commander of ITALBATTe by the Brigadier General Edgard Lawandas to the Italian Blue Helmets.

Joint activity (operational and training) with the Lebanese Armed Forces is provided for by UN Resolution 1701. The activities also include joint patrols along the Blue Line (demarcation line between Lebanon and Israel) and in the entire Area of ​​Operations between the Litani River in the north and the Blue Line South.

The Aerial Shield exercise has just been held at the RC-W Camp Villaggio Italia, dedicated to the defense of Counter ...
133
Read

The units of the Regional Command West, framed under the Piedmont Cavalry regiment (2nd) of the Army ...
5710
Read

In the afternoon of August 8, an anti-piracy and Maritime exercise took place in the waters of the Gulf of Aden ...
818
Read