Romania: Italy and Germany together for NATO Airspace Defense 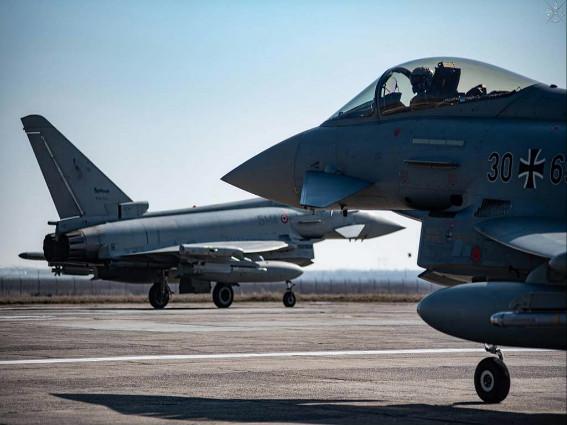 4 aircraft Euro Fighter increased to 8 in the last few days, 20 rapid take-offs on alarm and about 400 flight hours: these are the numbers of the operational activity carried out so far by Euro Fighter of the Air Black Storm Task Force of the Italian Air Force as part of the Italian-led NATO mission of Enhanced Air Policing Area South (eAPA-S) in Romania, ongoing since last December.

An intense activity which, starting from mid-February, is further enriched with the presence of six Euro Fighter of the Taktisches Luftwaffengeschwader 74 of the German Air Force, which contributes personnel and assets to the QRA (Quick Reaction Alert) service within the framework of a bilateral collaboration agreement between the two countries.

Support provided by Task Force Air Black storm in terms of operational and logistical structures, and the close integration between the two contingents, has allowed Lutwaffe to significantly reduce the logistical effort and shorten both the preparation times and those necessary to achieve the operational structure of the assets.

The importance of the agreement was underlined on March 3 during a joint visit to the Mihail Kogălniceanu air base in Constanta, Romania, between the Chief of Staff of the Air Force, Air Force General Luca Goretti, and of the Chief of the German Air Force, lieutenant general Ingo Gerhartz.

Before meeting the respective contingents, the chiefs of staff of the two Air Forces had a meeting with the head of the Forțele Aeriene Române, lieutenant general Viorel Pană, during which they paid tribute to the eight crew members of the Romanian Air Force who yesterday, Wednesday 2 March, they lost their lives in two flight accidents. 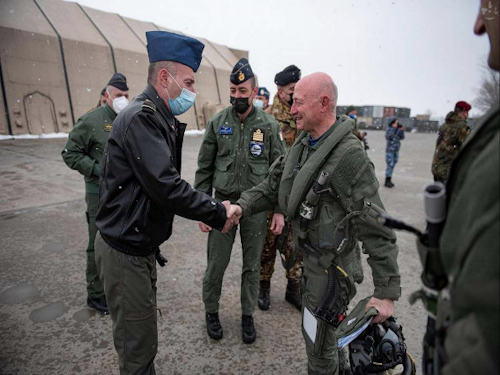 In particular, General Goretti wished to express the closeness and solidarity of the entire Air Force to the relatives of the fallen and to the colleagues of the Forțele Aeriene Române.

Subsequently the chief of staff, accompanied by the commander of the TFA Colonel Morgan Lovisa, visited the infrastructures and met the staff of the Air Task Force. In addressing the men and women in blue, he underlined: I am proud of you, the contribution you are providing to Italy and NATO is fundamental in the operational scenario in which we find ourselves operating in these days.

Italy, thanks to your work, plays a leading role in the international chessboard and the Air Force is the spearhead. I am deeply grateful to you for this.

The head of SMA then added: It is only thanks to your professionalism and your skills that the Armed Force was able to respond quickly to the requests of the Italian Government by deploying an additional four Eurofighters here in Romania in a very short time to defend the Euro-Atlantic skies.

Referring then to the cooperation with the Germans, General Goretti said he was fully satisfied with the high level of standardization and interoperability achieved by the two European air forces. The first mixed scramble carried out yesterday morning is the tangible demonstration of this. L'Euro Fighter has shown, once again, to be an absolutely mature machine with a level of operational performance that is the basis of NATO's Air Defense.

At the end of the day, the commander of the German Air Force, lieutenant general Ingo Gerhartz, thanked the head of SMA for the precious support and for the close synergy between the Italian and German personnel. A virtuous form of collaboration that will certainly not end with this operational experience but which will also be replicated in future activities that will involve the two military air forces.

From a common defense perspective, the sharing of weapon systems, with levels of interoperability and standardization therefore already very high in terms of technical and operational procedures, undoubtedly represent an added value for the future of air operations.

The frigate Carlo Bergamini returned to Taranto on 2 July at the end of a long period of assignment ...
221
Read