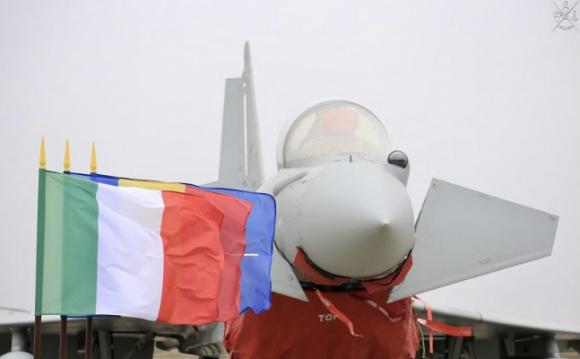 The notes of the national anthems of Italy and Romania that resound on the apron of Mihail Kogalniceanu airport mark the beginning of the ceremony with which NATO certified the FOC (Full Operational Capability) of the "Black Storm" Task Force which , under the orders of col. Morgan Lovisa, will contribute to the safety of the airspace of the Eastern European country alongside the Romanians.

The official recognition of this first milestone reached by the Italian contingent is handed over to Colonel Lovisa by General Fernando De La Cruz, commander of the CAOC of Torrejon who in his speech wanted to underline how the presence of Italians in Romania, as well as success in other Air Policing operations in which the Air Force and other NATO countries take part, represent one of the key elements of the Alliance's security policy.

The presence on the square of a squad of soldiers from the Forṱele Aeriene Romậne and the Air Force, as well as a Eurofighter 2000 and a MiG-21 on static display, testify how the two countries are side by side to guarantee the collective defense of NATO airspace.

The ceremony was also attended by the Romanian Defense Chief of Staff, Lieutenant General Daniel Petrescu, the General by Francesco Dressed, representing the commander of COVI (Operational Command of Summit Joint Forces) and the Chief of Staff of the Air Force , the chief of staff of the Romanian air force gen. Viorel Pana and the ambassador of Italy to Romania, Alfredo Maria Durante Mangoni. 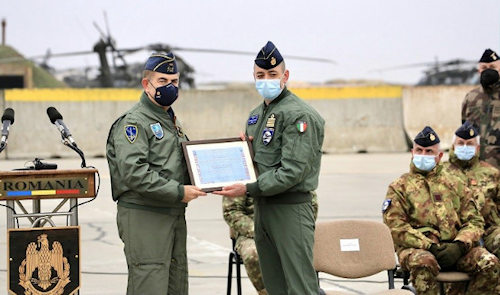 In his speech, General Dress recalled that the activity that is taking place in Romania is part of a broader operation of Air Policing which, since 2014, ensures the security of NATO airspace 24 hours a day, 24 days a year.

Then, addressing the Italian contingent, he thanked him for the work done so far, underlining how the work of the men and women of the Air Force in these contexts strengthens the prestige and role that Italy plays within NATO.

The Romanian Defense Chief of Staff Lieutenant General Daniel Petrescu, addressing General da Dress and Ambassador Durante Mangoni, wanted to recall the strong bond that unites Italy and Romania, a relationship that does not stop only with military collaboration but it also covers economic and social sectors. His wish is that activities like these strengthen the existing bond and open new and further spaces for collaboration.

The mission of the TFA "Black Storm", whose lead is assigned to the 36th flock of Gioia del Colle, aims, in fact, to contribute to the integrity of the Romanian airspace by strengthening the surveillance activity normally carried out by MiG- 21 of the Forṱele Aeriene Romậne, with a defense device integrated with the Eurofighter 2000 aircraft, coming from the 4th, 36th, 37th and 51st wing of the Italian Air Force.

The activities of Task Force Air it will also make it possible to conduct operational activities aimed at strengthening cooperation and therefore interoperability between national assets and those of Host Nation (HN), as well as the allied contingents present in the area of ​​interest, in analogy to what has already been pursued by the Italian Air Force in Iceland, Bulgaria and the Baltic countries.

Nave Caio Duilio has recently crossed the Pillars of Hercules, undertaking the oceanic route that will bring unity ...
54746
Read

With the last two courses in favor of the National Police of Djibouti (PND), the activities of the section ...
510
Read

The Eurofighters of the “Black Storm” Task Force Air, located at the Mihail Kogălniceanu airport in Constanta - Romania ...
3221
Read