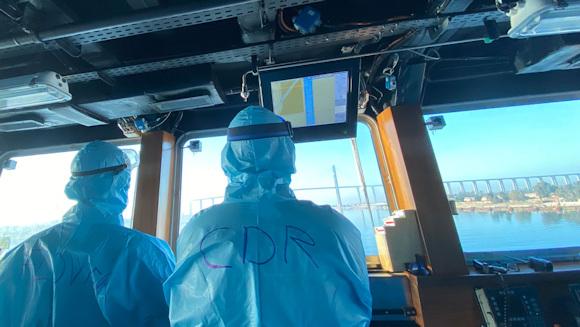 Ship Carabiniere, having assumed the role of Flagship area of  European Union Naval Force Operation Somalia has made the passage of the Suez Canal, a bridge between the Mediterranean and the Indian Ocean, an economic and cultural crossroads, covering about 85 miles along the historic road that has represented, since 1869, the connection between the Old Continent and the Middle East.

At the end of the transit, Ship Carabiniere, once entered the waters of the Red Sea, after 12 hours of navigation through the Channel, took a southern route to meet at sea, with the Sinai Peninsula in the background, 10th Coastal Naval Group (COMGRUPNAVCOST 10), national contribution to the Multinational Force & Observers (MFO), for quick interaction within the scope of logistics support activities.

Now, the “Flagship” of Task Force 465 enters the heart of the European Union naval mission, Operation Atalanta, aimed at preventing and combating acts of piracy, protecting the freedom of navigation of merchant traffic and in particular the protection of ships used by the World Food Program (WFP) for the transport of humanitarian aid to Somalia.

The units of the Regional Command West, framed under the Piedmont Cavalry regiment (2nd) of the Army ...
225
Read

Nave Thaon di Revel, the last ship delivered to the Navy, left on 12 August from the port of La Spezia to ...
1986
Read

In the afternoon of August 8, an anti-piracy and Maritime exercise took place in the waters of the Gulf of Aden ...
706
Read

With the return respectively to the ports of La Spezia and Taranto, Nave Vulcano, under command of ship captain Alberto ...
685
Read

On the afternoon of Thursday 28 July, with the arrival at Malbork Krolewo airport of the four Eurofighter F -...
450
Read