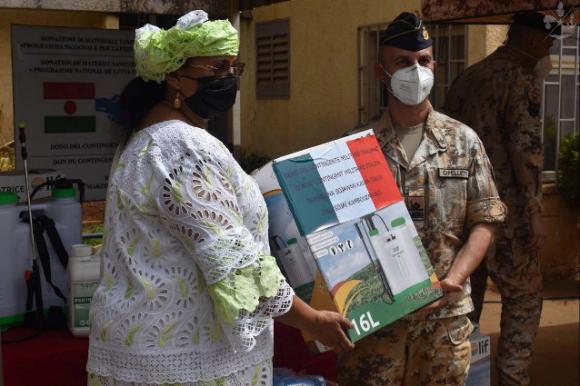 The donation of medical materials and technical devices to carry out the reclamation service of the areas considered to be at high risk took place on 11 March at the Ministry of Public Health and Social Affairs of Niamey, at the end of a Civil-Military Cooperation project. (CIMIC), aimed at supporting the public health sector in the Nigerian capital.

The event was attended by the MISIN commander, pilot colonel Davide Cipelletti and by Dr. Hazida Jackou, national coordinator of the National Malaria Prevention Program.
Among the authorities also intervened the Italian ambassador to Niger, if Emilia Gatto and the Minister of Public Health, dr. Idi Illiassou Mainassara.

The Ministry of Health is the state body of reference for the fight against malaria through the National Malaria Prevention Program. Government sources report that malaria still represents the main threat to health in Niger and is endemic throughout the country, accounting for 28% of registered diseases, and even for the 50% in cases of death. The percentage reaches the 62% of cases in children under the age of 5.

With a population 80% below the poverty line and in the absence of a vaccine, malaria prevention remains the only form of fighting the emergency. 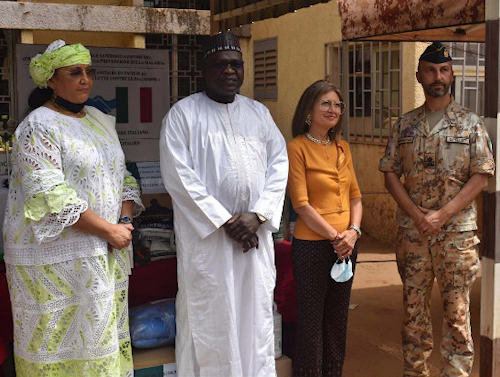 The collaboration between the Ministry of Public Health through the National Malaria Prevention Program and Italy, through the Italian mission in Niger MISIN, has made it possible to identify the primary needs for the reclamation of the areas considered to be malaria outbreaks and to actively contribute to reduce the risk of contagion.

The Nigerian Minister of Public Health expressed his thanks for the donation as follows: "I would like to express my appreciation for the quality of relations between Italy and Niger. These relations are characterized, among other things, by the multiform support of this country in favor of Niger. Italy, in fact, has strongly supported the Niger in the fight against cholera with kits that have saved thousands of lives of our fellow citizens. More recently, Italy has supported the fight against COVID-19. These various gestures illustrate the great interest that Italy attaches to the well-being of the population of Niger. This means that the efforts of the state and of our important partners such as Italy are making a significant contribution to improving the health of our fellow citizens ".

The Italian ambassador to Niger, if Emilia Gatto, thanked the "MISIN soldiers for the organization of the donation activity which further testifies to the commitment of the Italian mission in Niger, made up of training for the Niger military but also of attention to the people and civil society".

The Italian Support Mission in Niger has established a strong bond with the authorities and the local community through which Italian personnel are committed to successfully addressing the health and safety challenges of the Nigerian people.

The frigate Carlo Bergamini returned to Taranto on 2 July at the end of a long period of assignment ...
231
Read

With the participation of gen. ba David Morpurgo, deputy commander of the DACCC of Poggio Renatico, at the Distinguished ...
214
Read