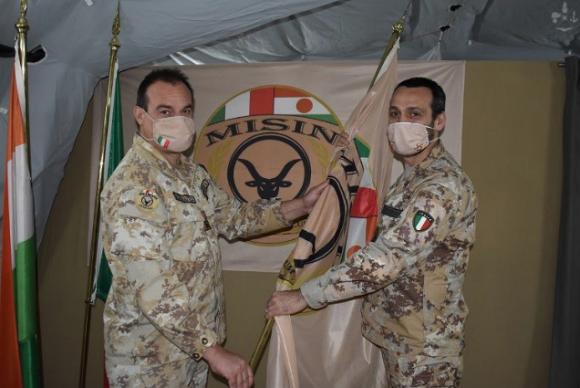 This morning, at the American compound of Air Base 101 in Niamey (Niger), in a restricted form to comply with the rules for combating the spread of Covid-19, the passage of command between the air brigadier general Maurizio D'Andrea took place and Brigadier General Alessandro Grassano, who will have the task of leading the Support Mission in Niger (Misin).

With this change the leadership of MISIN passes from the Air Force to the Italian Army, in the logic of alternating between the two Armed Forces.

The Bilateral Support Mission in Niger is today engaged on several fronts with tasks ranging from cooperation, development and support, to the training of local security forces.

This takes place through the development of capacitive packages in favor of some specialized departments:

- the Nigerian parachute battalion, unique of its kind in the area, with professional programs ranging from basic infantry, through those against C-IED threats up to parachuting courses with bridle rope, all organized by instructors from the 187th paratrooper regiment, 8th sapper engineers and CAPAR belonging to the brigade thunderbolt;

- the GIS, Special Intervention Group, based on 185 ° RAO, whose operators will operate in the ranks of the intervention group as a special forces unit of the Nigerian Ministry of the Interior;

The GARSI project is a European Union project whose phases include development in various sectors such as training, materials and equipment, operational results, relationship with the population.

The units of the Regional Command West, framed under the Piedmont Cavalry regiment (2nd) of the Army ...
225
Read

Nave Thaon di Revel, the last ship delivered to the Navy, left on 12 August from the port of La Spezia to ...
1986
Read

In the afternoon of August 8, an anti-piracy and Maritime exercise took place in the waters of the Gulf of Aden ...
706
Read

With the return respectively to the ports of La Spezia and Taranto, Nave Vulcano, under command of ship captain Alberto ...
685
Read

On the afternoon of Thursday 28 July, with the arrival at Malbork Krolewo airport of the four Eurofighter F -...
450
Read