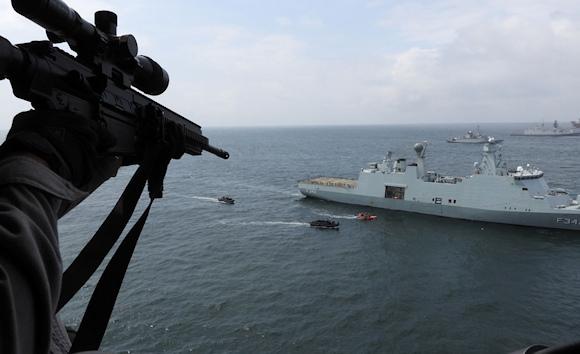 Ship Antonio Marceglia, under the command of frigate captain Francesco Ruggiero, took part from 2 to 9 November in the fourth edition of the annual exercise Grand African NEMO 2021 (Grand African Navy's Exercise for Maritime Operations), promoted by the French Marine Nationale.

The exercise, abbreviated to GANO2021, represents the most articulated multinational training event on the African continent which, in addition to involving the Navies of the coastal countries of the Gulf of Guinea adhering to the Architecture of Yaoundé, sees the participation of air and naval assets of various nations such as Brazil, France, England, Portugal and the United States. The Navy, with the frigate Martinengo, had also participated in the previous edition.

The Gulf of Guinea is crossed by maritime communication lines linking Central Africa and the Mediterranean, of fundamental geo-strategic importance for merchant traffic and for the vital energy interests of our country. However, it is also considered to be one of the most dangerous areas in the world for navigation due to frequent piracy attacks and illegal activities such as arms smuggling, drug trafficking or illegal fishing, which undermine the free use of the sea and hamper commercial development. of Western Africa. 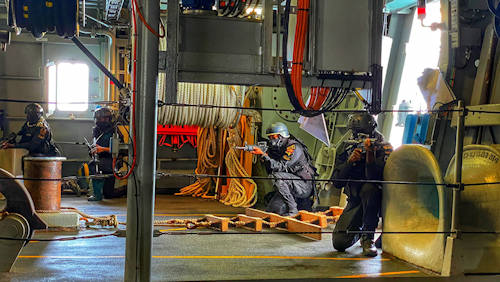 The objective of the exercise, in accordance with the European concept of Coordinated Maritime Presence (CMP), is the strengthening of cooperation and interoperability between the operational coordination centers, the naval units of the local navies and partners engaged in the surveillance of the area, favoring the exchange of information and the sharing of tactics and best practices, with a view to improving the operational level of the participants.

During this busy week, 20 scenarios were developed with the aim of simulating Counter Piracy, Search And Rescue (SAR), anti-pollution operations and training aimed at combating the trafficking of weapons, drugs or migrants.

In particular, Nave Marceglia interacted with the Ghanaian Navy and with the United Nations Office on Drugs and Crime, pretending to be a pirated freighter. The training event saw the participation of Maritime Operation Center Ghanaian who, having received the danger signal, activated the assault vehicles of the special forces, which carried out an activity of boarding. Subsequently, in a scenario to combat drug trafficking, the Italian frigate was boarded and inspected, an operation conducted for the benefit of the observers: Prosecutors Ghanaians, magistrates involved on the front line in the prosecution of maritime crimes. 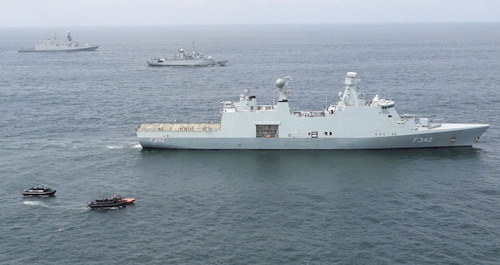 On the occasion of a second exercise, Nave Marceglia she trained with the Benin Navy, simulating being an attacked oil tanker and, later, a ferry involved in migrant smuggling.

On 9 November, the last day of the exercise, the VIP Day took place in the waters off Pointe Noire (Congo), where the main units, including, in addition to Nave Marceglia, the French FS Germinal, the Danish HDMS Esbern Snare, the Brazilian SNB Amazonas, together with an assault vehicle of the Congolese Navy, first conducted a naval parade, performing advanced level cinematic maneuvers and, subsequently, they simulated an action to counter a pirate attack, where the Danish unit simulated a merchant ship attacked by pirates and the Congolese rapid means intervened to defend it.

At the end of the tutorial, Ship Marceglia it continued patrolling inside the Gulf of Guinea, where it continues to be engaged in the operation Gabinia, in defense of national interests and the safety of maritime routes.

In the presence of the air squad general Nicola Lanza de Cristoforis, deputy commander of the Operational Command of ...
780
Read

It took place on the afternoon of last Saturday, June 18, at the multipurpose hall of 'Camp Singara', the base that ...
285
Read

On 19 May, the European Multi Mission Frigate Carlo Bergamini received a distress call from the ...
992
Read