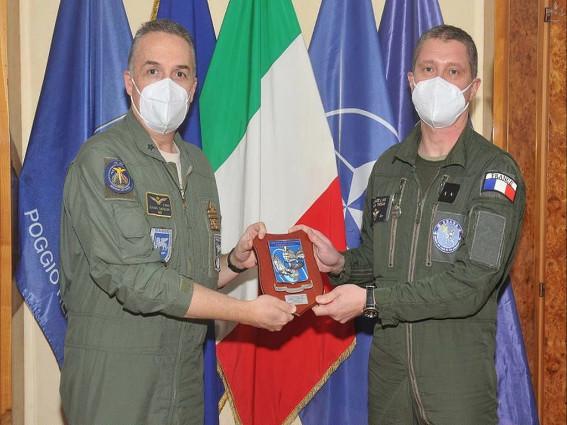 At aerospace operations command, a symbolic handover ceremony was held at the helm of the air component - Joint Force Air Component - from the NATO Response Force between the Italian and French JFAC command.

In compliance with the anti-covid19 health prevention protocols, a meeting was held at the JFAC facilities between the air division general Claudio Gabellini, commander of the AOC, and general ba Guillaume Thomas, commander of the brigade aérienne des operations of Limonest (France) which symbolized the passing of the baton at the helm of Jfac.

The Air Force in the course of 2021, through the aerospace operations command, he drove the Joint Force Air Component with the task of planning, developing, assigning and conducting air missions in accordance with the directives of the Joint Force Command (JFC).

In particular, in the last year there have been numerous operations and activities carried out by the Poggio Renatico base, including:

Allied Solace - NATO operation for the evacuation of Afghan civilians following the withdrawal of NATO forces in Afghanistan;

Steadfast Defender 2021 - planning for the use of the Nrf21 package for an Art.5 NATO operation;

Noble Jump 2021 - for the projection of the air force in the theater of operations;

Noble Bonus 2021 - organized and managed by the JFC of Naples, on a monthly basis, with the aim of training the staff with a series of events that in the jargon are called continuation training.

The next period that will see the AOC base again at the helm of the Nrf Air component will be in 2026 with the so-called Nrf26 rotation, with a preparatory exercise phase that will be carried out in 2025.

The JFAC is a command and control structure that is activated, when needed, during a crisis. In peacetime the permanent structure is called Core Jfac.

Il Core Jfac Italian is located at the Poggio Renatico Aerospace Operations Command and is responsible for the development of the Standard Operating Procedures (Sops) that will be used during the operations.

Il Core JFAC it has a limited number of people, for this reason its activation requires adequate reinforcements in terms of personnel (augmentees).

Nave Caio Duilio has recently crossed the Pillars of Hercules, undertaking the oceanic route that will bring unity ...
54369
Read

With the last two courses in favor of the National Police of Djibouti (PND), the activities of the section ...
494
Read

The Eurofighters of the “Black Storm” Task Force Air, located at the Mihail Kogălniceanu airport in Constanta - Romania ...
3209
Read

"Italy at the command of NATO Mission Iraq confirms the excellence of our country's Armed Forces at the level ...
875
Read