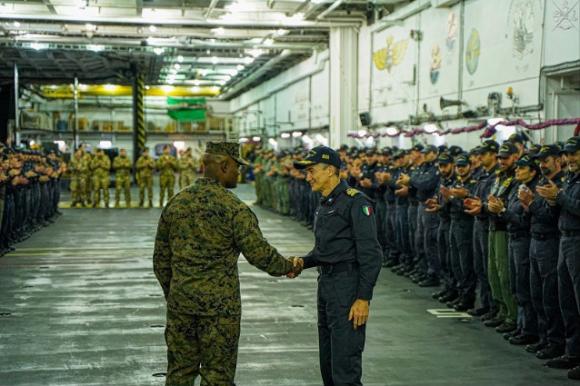 ship Garibaldi concluded the last phase of the NATO exercise Cold Response 22 in the Nordic scenery of Andfjorden.

During the dedicated and complex landing operations of the amphibious component towards the so-called landing zones set up close to the friction lines with the opposing forces, he received a visit from the commander-in-chief of the naval team (CINCNAV), as Aurelio De Carolis.

Admiral De Carolis marked the moment with his presence aboard the aircraft carrier cruiser command headquarters of the CATF (Commander Amphibious Task Force) and the CLF (Commander Landing Force).

After meeting USMC Brigadier General Anthony M. Henderson (CLF) and Rear Admiral Valentino Rinaldi (CATF) he was able to discuss the exercise with them, experiencing first hand the great synergy created on board between the two Staff.

The CINC addressed the crew of the Garibaldi acknowledging the results obtained so far and underlining the importance of cooperation between the forces of the allied countries, of which the marked integration demonstrated by the two staff on board was an excellent demonstration.

Shortly Ship Garibaldi it will leave the waters of Norway to return to the Mediterranean.