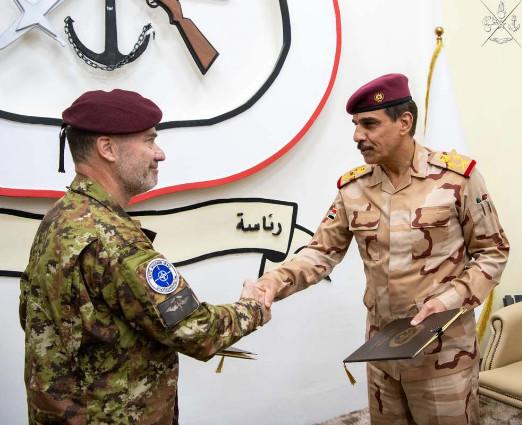 On June 26, 2022, the commander of the NATO Mission in Iraq (NMI), gen. Giovanni Maria Iannucci and the Chief of Defense of the Republic of Iraq, gen. Abdul Amir Rashid Yarallah, signed the IRAQ Memorandum of Accession al NATO Codification System.

The System, the result of an agreement between signatory countries, the Alliance and partners, allows for the univocal classification and identification of spare parts, equipment and supplies, with the aim of making logistical support and management more rapid and effective. some materials.

The event, the result of a long work of NMI staff with Iraqi colleagues, will allow the Iraqi Armed Forces to also access the services of the NATO Support Procurement Agency (NSPA); the agency that supports Alliance nations and partner countries, providing capabilities and services aimed at procurement and logistical, health and infrastructural support.

The agreement, which establishes the achievement of the first of the fourteen long-term objectives agreed with the Iraqi Defense Staff, will allow Baghdad to take a further step towards interoperability with NATO and is at the same time an important step forward. in the process of developing a modern logistic organization, capable of supporting the Iraqi Armed Forces and consolidating their role in the wider stabilization process of the Middle East region.

Nave Thaon di Revel, the last ship delivered to the Navy, left on 12 August from the port of La Spezia to ...
1896
Read