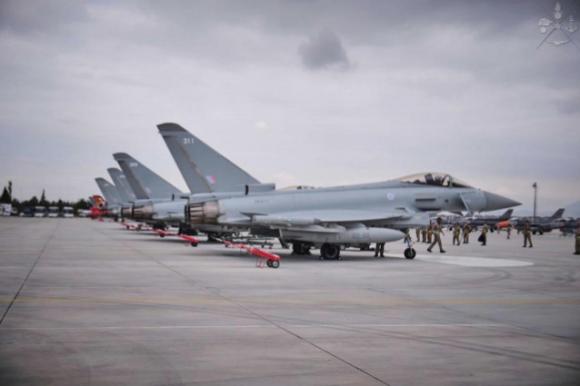 With the participation of gen. ba David Morpurgo, deputy commander of the DACCC of Poggio Renatico, al Distinguished Visitors Day, the Ramstein Dust II 2022, one of the main NATO exercises organized by Allied air command of Ramstein (Germany) based on Konya (Turkey) in collaboration with the Turkish Air Force.

From 20 to 29 June, the air forces of Turkey, United Kingdom, Iraq, Jordan, Pakistan and Azerbaijan took part in the exercise with their own assets, together with the NATO AWACS aircraft and the Poggio Renatico DARS.

The DACCC participated with the redeployment of about 115 women and men from the command of the Poggese base, of its DARS set-up, that is a set-up with advanced capabilities of command and control and management and surveillance of the Airspace, of the mobile radar Lanza LTR-25 and two radio modules Ground-Air-Ground.

The preparatory activities began last June 1st, with the transfer of a convoy consisting of about 30 vehicles from the Poggio Renatico base to Turkey, traveling a total of 2500 km by land and sea. It should be emphasized that for the first time the DACCC has deployed the Lanza LTR-25 mobile radar outside Italy, a three-dimensional asset capable of being integrated into the Allenza air defense system.

"The integration of Exercise RADU-II / 22 into the multinational Anatolian Eagle has offered unique training opportunities regarding the implementation of large-scale NATO procedures for air operations in the event of a crisis and conflict" Colonel Jorg Sieratzky, director of the exercise, said: "The annual Ramstein Dust exercise series is the inevitably necessary foundation to ensure that DARS 'unique AirC2 capability is ready to be implemented and deployed effectively".

The DACCC is the only NATO command capable of carrying out aerial planning, tactical command and control, airspace management and surveillance from the stationary or redeployed site of Poggio Renatico. Its ability to deploy active and passive sensors makes it unique in the Alliance landscape.

The Aerial Shield exercise has just been held at the RC-W Camp Villaggio Italia, dedicated to the defense of Counter ...
134
Read

The units of the Regional Command West, framed under the Piedmont Cavalry regiment (2nd) of the Army ...
5718
Read

In the afternoon of August 8, an anti-piracy and Maritime exercise took place in the waters of the Gulf of Aden ...
819
Read