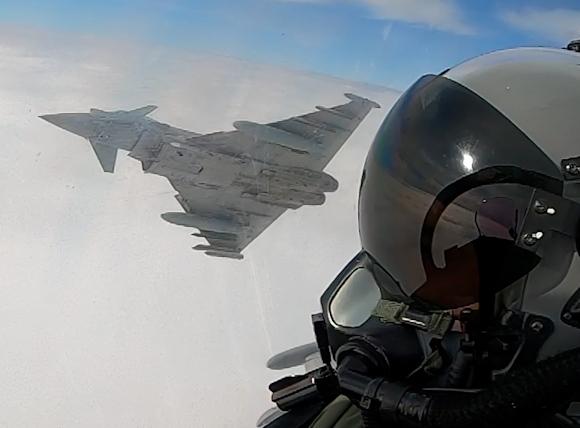 On the morning of Saturday 5 February, the CAOC of Torrejon, through the CRC (Control Reporting Center) of Balotesti (Bucharest), activated the procedures for rapid take-off on Scramble of a pair of Euro Fighter of Task Force Air Black storm deployed as part of the mission to Romania as part of the eAPAS (enhanced Air Policing Area South) operation.

Lo Scramble, a technical term to indicate precisely the request for a rapid take-off, the two Italian interceptor fighters of the QRA (Quick Reaction Alert) cell were ordered following a potential risk of unauthorized entry of air traffic into the region of competence of the bodies of the Romanian control FIR (Flight Information Region).

The Italian aircraft have been assigned the task of carrying out a CAP (Combat Air Patrol) within the Romanian airspace to monitor traffic before returning to Mihail Kogalniceanu airport.

Task Force Air Black storm is deployed at the Romanian Mihail Kogălniceanu airport in Constanta to help ensure the integrity of Romania's airspace by strengthening the surveillance activities carried out by Forṱele Aeriene Romậne, the Romanian Air Force.

With the participation of gen. ba David Morpurgo, deputy commander of the DACCC of Poggio Renatico, at the Distinguished ...
210
Read