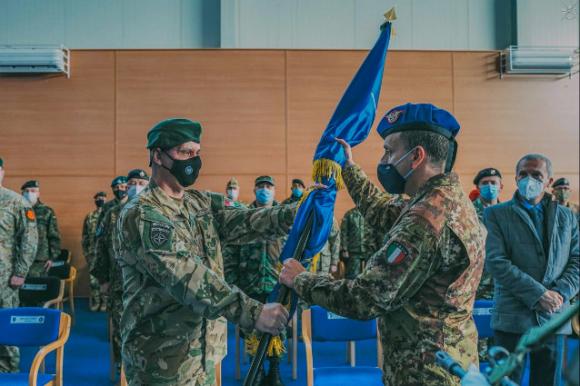 On Wednesday 17 November, the Italian Army Brigadier General Luca Piperni took over, as deputy commander of KFOR, from the Austrian Brigadier General Günter Schöpf who served for 13 months in the NATO mission in Kosovo.

During the ceremony, the commander of KFOR, the Hungarian Major General Ferenc Kajári, addressing Brigadier General Schöpf said: "Your help and your experience have made it easier for me to rise to the post of captain, your expert professionalism has made me feel at ease".

The KFOR commander concluded his speech by declaring that the Austrian Brigadier has all the values ​​considered fundamental in the military and subsequently welcomed Brigadier General Piperni into his ranks, wishing him good luck in his new post and to continue in the course traced by his predecessor with duty, reliability and institutional commitment.

The changeover ceremony took place at the base of the KFOR command in Pristina, where all the representatives of the nations that make up the NATO military contingent were present, the commanders of the two regional commands East and West and for Italy the general of division Francesco Bruno head of the operational support department of the Interoperable Summit Operations Command (COVI).

In the presence of the air squad general Nicola Lanza de Cristoforis, deputy commander of the Operational Command of ...
822
Read