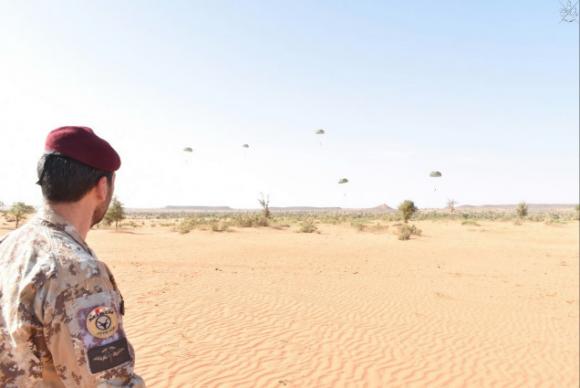 The air raids in favor of the Nigerian paratrooper battalion with which the qualifications of military paratroopers were issued to personnel trained by the SFA Army and by the personnel of the “Folgore” paratrooper brigade.

The activity, conducted in compliance with the anti Covid 19 prevention measures, was carried out in the period from 6 to 16 April on the “Niger 3” launch area near the capital of Niger, Niamey.

The aviation activities, conducted with the support of a C27J of the 46th Air Force Air Brigade, were the completion of a hard training process begun in the previous months with the aim of increasing the operational capabilities of the Nigerian Army, increasingly engaged in the delicate task of preventing and countering hostile activities against the civilian population.

The military parachuting course was carried out at the same time as the launch director course, and both fall within the new concept of action of the MISIN mission which is reviewing and improving the capabilities of the Nigerian counterpart, passing from a training type developed for individual modules, to more complex capacity development program, a fundamental step for increasing individual and collective training of the Nigerian army. 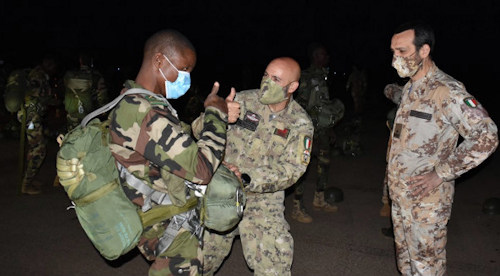 At the end of the activity, a ceremony took place, in a reduced form to comply with the anti-contagion measures, presided over by the commander of the National Cooperation Mission in Niger (MISIN) General Alessandro Grassano, who saw the delivery of 68 parachuting patents and 3 certificates of launch director to Nigerian personnel.

I Mobile Training Team (MTT) Italians are made up of soldiers of the Army, by operators of the Special Forces of the 185 ° reconnaissance and target acquisition regiment and by soldiers of the carabinieri. Their activities refer to the doctrine of Security Force Assistance (SFA), implemented in recent times to equip requesting nations with military capabilities that they do not possess or have only partially.

MISIN's activities complement those of other partner countries of the European Union and NATO that are in Niger in support of the countries belonging to the G5 Sahel (Niger, Mauritania, Mali, Burkina Faso and Chad), increasingly engaged in the fight against crime local organization, the fight against terrorism and illegal trafficking in human beings.

The units of the Regional Command West, framed under the Piedmont Cavalry regiment (2nd) of the Army ...
100
Read

Nave Thaon di Revel, the last ship delivered to the Navy, left on 12 August from the port of La Spezia to ...
1877
Read

It took place yesterday in the Italian Headquarters of Shama, named after Lieutenant Andrea Millevoi (MOVM), in the presence ...
236
Read