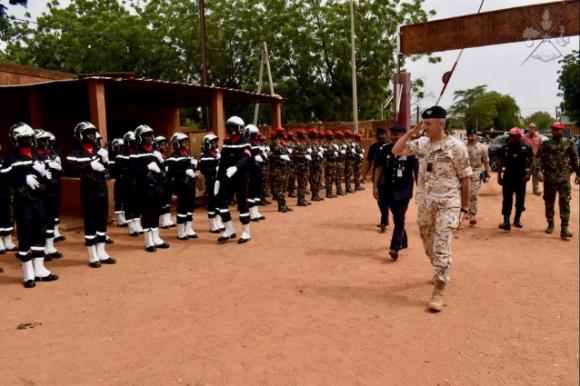 La Bilateral Support Mission in Niger (MISIN), in its civil-military cooperation activities managed by the personnel of the Italian Army under al Multinational CIMIC Group of Motta di Livenza, has completed a project aimed at increasing the technical and operational capabilities of the Nigerian National Fire Brigade stationed in the capital which, among the various institutional tasks of civil protection, sees him engaged in response to different situations emergencies in the municipality of Niamey.

The material that was donated by the Italian government through MISIN, includes devices and tools that are mainly used during the heavy rain season when the copious floods hit above all the villages, wiping out hundreds of homes, and on the occasion of road accidents. also caused by the poor conditions of the communication routes.

The ceremony for the delivery of special equipment was held in the presence of the commander of the Italian Support Mission in Niger (MISIN), Brigadier General Liberato Amadio, and the commander of the national grouping of the Niger Fire Brigade, Colonel Mohamed Sidi who, in recognizing the importance of the activities of the National Fire Brigade aimed at the safety of the Nigerian population, he expressed particular gratitude to the Italian contingent for the sensitivity shown on several occasions.

Today's activity was conducted in the operational context that sees MISIN employed under the coordination and according to the directives given by the Interoperable Summit Operations Command COVI, led by the general of the army corps Francesco Paolo Figliuolo.

At the headquarters of the Engineering Regiment in Beirut, in the presence of Colonel Farhat of the training directorate, of the...
77
Read

The training activity saw the units of the Battle Group Bulgaria engaged which, within the Novo Selo Training ...
200
Read