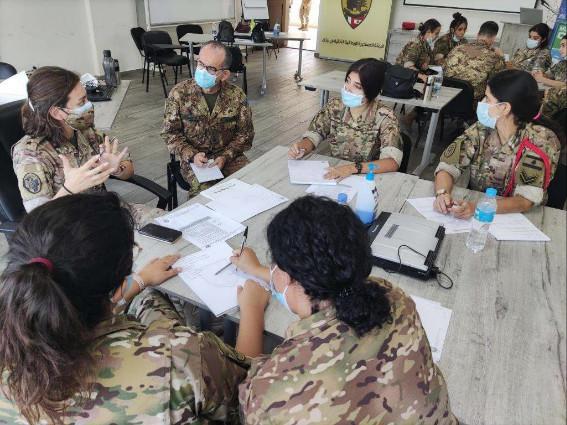 In recent days, with the delivery of qualification certificates, the training cycle consisting of 5 CIMIC courses was concluded, in favor of Lebanese Armed Forces (LAF), organized by Italian Bilateral Military Mission in Lebanon (MIBIL) and conducted by Mobile Training Team (MTT) Italian from Multinational CIMIC Group of Motta di Livenza.

The five courses, lasting a total of eight weeks, were held at the command site in Beirut, alternating theoretical and practical activities. The participating soldiers, belonging to different realities of the Lebanese armed forces, have learned and deepened the techniques necessary for the future disengagement of the duties of the civil-military cooperation operator, both at the Staff level and at the tactical level, up to acquire the qualification of CIMIC Instructor.

The training process was divided into five main sectors.

The first, CIMIC Tactical Operator, concerning the basic modalities for the development of core functions of civil-military cooperation at the tactical level, the second, intermediate, provided the necessary skills for the development of CIMIC activity planning at the Staff level; the third, module Liaison, enabled the students themselves to use advanced techniques of empathic communication and negotiation; the fourth, CIMIC course Female Engagement Team, enabled the female component of the LAF to conduct engagement activities at a tactical level if interaction with the female population is envisaged in support of a mission; the fifth and last, CIMIC Train the Trainers, through the methodology of training on job and the provision of ad hoc instructions allowed the best students who were suitable for the previous training to become an instructor in turn.

The outcome of the training activities in favor of the designated Lebanese military was extremely satisfactory, consolidating the strong interest of the Lebanese authorities in collaboration with the Italian Armed Forces and fully confirming the validity of the mission and the training project.