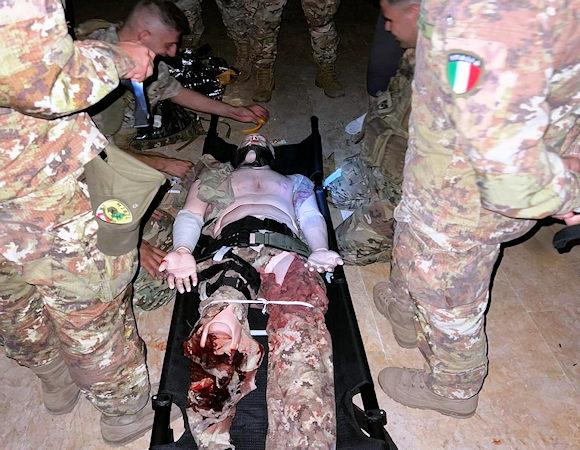 At the command of the 1st infantry brigade of the Lebanese Armed Forces (LAF), the closing ceremony of the Tactical Combat Casualty Care (TCCC) course in favor of 23 Lebanese soldiers took place.

The course, lasting 4 weeks, was conducted by a team of five instructors from the School of Health and Military Veterinary in Rome, with the aim of promoting the acquisition of basic skills in the field of tactical pre-hospital rescue.

The training course was conducted through a series of theoretical and practical modules, also using teaching systems and methodologies with high-fidelity simulation, both in standard operating contexts and in scenarios with a high stressful impact, such as training in low visibility scenarios. .

The MIBIL instructors have also adapted the educational path to the training needs expressed by the LAF, contextualizing the most updated pre-hospital treatment protocols of the trauma victim to the local tactical procedures. Procedures treated in the TCCC protocol include: immediate management of compressible massive hemorrhages, basic airway management, treatment of chest trauma, administration of intravenous and intraosseous fluids, prevention of hypothermia and handling of the injured person, analgesia and prevention of infections, management of fractures and burns, cardiopulmonary resuscitation maneuvers.

The simulation activities also shifted the training target from the individual to the team level, promoting scenarios where the decision making processes of rescuers and team leaders can be tested, especially in the presence of a high number of injured.

The excellent results achieved in the training project, completed through the adoption of scrupulous measures to limit the spread of the SARS-CoV-2 virus, were unanimously recognized by the intervening military authorities, helping to further consolidate the link between the Italian Armed Forces, the MIBIL mission and the Lebanese Armed Forces.

Over the next few months, other editions of the TCCC course by MIBIL will be conducted, underlining the strategic importance of a gradual increase in overall health intervention capabilities in tactical pre-hospital scenarios in favor of the Lebanese military component.

The Aerial Shield exercise has just been held at the RC-W Camp Villaggio Italia, dedicated to the defense of Counter ...
152
Read

The units of the Regional Command West, framed under the Piedmont Cavalry regiment (2nd) of the Army ...
5825
Read

Nave Thaon di Revel, the last ship delivered to the Navy, left on 12 August from the port of La Spezia to ...
2381
Read