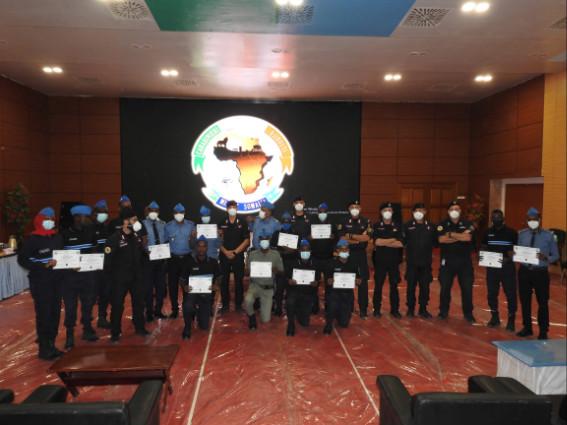 At the amphitheater of the Police Academy "IDRISS FARAH ABANEH" of Djibouti, in the presence of the commander of MIADIT 15, Colonel Nicola Mangialavori and Major Omar Youssouf Omar, director of the Academy Courses, the closing ceremony of the course was held " anti-terrorism and fight against organized crime ”held by staff of the Special Operations Group (ROS) of the Carabinieri, aimed at 19 members of the Gibutian National Police.

The training activity, aimed at an audience of personnel with experience in the sector, represented a moment of sharing and deepening theoretical knowledge and experiences, culminating in joint training activities in the city environment.

Learners were taught on terrorist escalation, on the phenomenon ofhomegrown and on the danger indicators that make it possible to prevent and counter radicalization in the weakest subjects, with particular reference to local contexts. Attention was then placed on the centrality of the African region in world-wide illicit trafficking and on the link between terrorist cells and transnational criminal organizations that control significant portions of territory in Africa.

At the end of the first phase of the course, the operational model used by the ROS carabinieri on the national territory for the fight against terrorist-mafia phenomena was illustrated, with particular attention to the investigative analysis procedures, development of information and elaboration of the investigative project.

In this context, particular attention was paid to "sur le terrain" activities, allowing students to acquire the basic elements for the effective execution of observation, control and shadowing services, in the context of judicial police and anti-terrorism activities, in particular, evolved dynamic services for the performance of investigative and information tasks of excellence.

The central point of the activity was precisely the dynamic service, a fundamental component of the "operating model" used by ROS in the activity of contrasting criminal phenomena, due to the unassailability of its results, the effectiveness both in the fight against organized crime and to that of a subversive matrix and for the ability to guarantee the penetration of criminal contexts, allowing to overcome the characterizations of confidentiality and compartmentalisation.

The course was also a moment of exchange of experiences between the operators of the two countries and once again highlighted the importance of international police cooperation to combat transnational criminal phenomena as well as global terrorism, highlighting that only the same characteristics of flexibility of the police forces and their constant updating can constitute an effective form of contrast to these phenomena.