MIADIT 14: the Carabinieri of the Cultural Heritage Protection Unit form the Gendarmerie 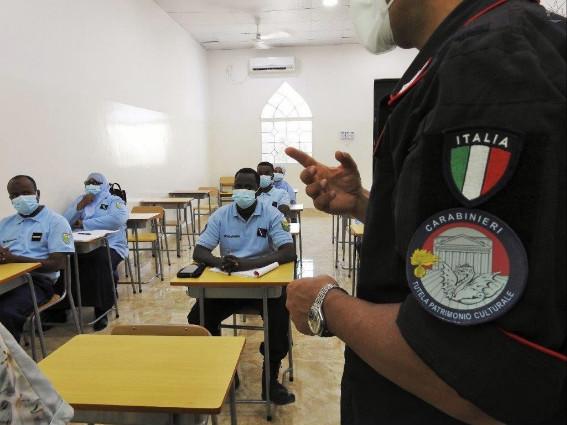 The consolidated collaboration with the Djiboutian security forces, as part of the MIADIT mission in its fourteenth edition, sees once again the soldiers of the Arma engaged in an activity of Capacity Building against the local Gendarmerie.

The carabinieri of the Cultural Heritage Protection Unit were the first in the world, in 2016, to set up the Unesco task force Unite4Heritage which, under the aegis of UNESCO, is able to intervene in crisis areas for the protection of cultural heritage.

The task force, trained at the training center of the 2nd mobile brigade of the carabinieri to operate in high-risk operational theaters, is composed of Carabinieri of the TPC, art historians, scholars and restorers of the Higher Institute for Conservation and Restoration involved in numerous foreign theaters and express sectoral expertise on the prevention and repression of crimes for the protection of cultural heritage.

The idea of ​​creating a task force with these operational characteristics was born with the intention of avoiding that in the future situations such as the one that occurred in Syria in Palmyria where an entire archaeological city was the subject of systematic destruction by the terrorist group of the Islamic State. .

In the Bilateral Training Mission of the Somalian and Djiboutian Police Forces, the soldiers of the Arma, coming from the TPC nuclei of Monza and Bari, carried out a training project on the investigation techniques to be implemented to protect the artistic and cultural heritage of the Republic of Djibouti, providing its students with practical and theoretical tools aimed at combating the numerous illegal activities relating to this sector.

The military has sensitized the learners on the importance of carefully monitoring the cultural and landscape heritage present in this territory in consideration of the importance that Djibouti has for centuries in the Horn of Africa.

In Djibouti, in particular, there are numerous rock art sites dating back to 10 thousand BC and characterized by spectacular volcanic rock caves, whose engravings narrate the transition from predatory activities to the mixed economy.

During the course, the students were also reiterated the importance of the strategic position of Djibouti in the Horn of Africa by virtue of the most important ports on the continent, where criminal activities involving the international trafficking of works of art can frequently develop. or the remains of exotic animals (particularly in demand is ivory).

At the end of the course with the collaboration ofOffice National du Tourisme de Djibouti, a seminar was held on the main artistic and landscape sites of Djibouti in order to make the gendarmes fully aware of the protection of the national cultural heritage with the regulatory instruments in force in the Republic of Djibouti.

Nave Thaon di Revel, the last ship delivered to the Navy, left on 12 August from the port of La Spezia to ...
1895
Read