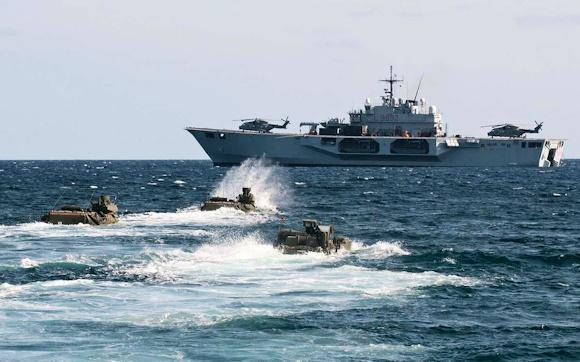 Mission accomplished for Italy with the European Amphibious Battle Group (BGAE) a lead Navy offered to the European Union in high operational readiness for 1 year, from last July 1, 2020.

Rear Admiral Alberto Sodomaco, commander of the amphibious force and commander of the third naval division, was the force commander of the package of forces (in total 3400 men and women) that made up the European Union Battle Group (EU-A-BG) with amphibious connotation in SIAF / SILF framework (Spanish-Italian Amphibious Force / Spanish-Italian Landing Force): 9 naval units with aerial and surface assets embarked, of which 1 command and control ship flagship and seat of Force Head Quarter, 4 amphibious assault ships (of which 1 Spanish and 1 Greek), 2 escort ships (1 destroyer and 1 frigate) and 2 minesweepers, 1500 marines making up the landing force with the marine brigade Saint Mark, the Spanish Infanteria de Marina, 1 Greek company and 1 Portuguese company.

Il Battle Group, consisting mostly of personnel and means of the amphibious force of the Navy, guaranteed a readiness of intervention in the coastal operational theater, within 6000 kilometers from Brussels, between 5 and 10 days from the activation order; the spectrum of the missions that could be carried out, very broad, ranged from Conflict Prevention (CP), to Evacuation Operations (NEO), Assistance to Humanitarian Operations (HA), competition in Stabilization and Reconstruction (SR) and Separation of contenders (SOPF) ).

Despite the emergency situation that characterized the period of preparation and readiness, the Force Head Quarter del EU (A) BG completed the certification in the first half of 2020, carrying out a Command Post Exercise (CPX), the European Lion 2020 carried out in the operational rooms of the amphibious ship San Giusto with the participation of about 190 soldiers, among the staff of the command of the Amphibious Task Force (CATF) and that of Landing Force (CLF), coming from 25 Commands / Bodies of the Navy with the presence of officers of the Spanish, Greek and Portuguese Navy.

On the day of June 17, 2020, during the command of the operation Safe Sea, Rear Admiral Sodomaco acting as force commander of the European force, in videoconference with Brussels, declared the readiness of its force al Political and Security Committee and to Military Committee of the European Union, a Force that guaranteed operational readiness for the 365 days of "mandate".

The amphibious force of the Navy has proven to be a Force ready to guarantee and at the service of the international community as well as of the Nation, representing a unique elite capacity in the panorama of the Defense capacitive package.

In the presence of the air squad general Nicola Lanza de Cristoforis, deputy commander of the Operational Command of ...
565
Read