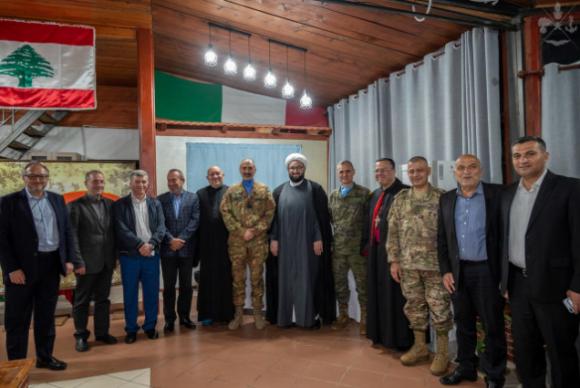 The command of the west sector of UNIFIL in recent days organized a meeting at the "Millevoi" base in Shama, during which the head of the mission and commander of the UNIFIL Forces, Major General Aroldo Lazaro, met the local civil, military and religious authorities belonging to the area of responsibility under Italian guidance.

To do the honors of the house the commander of west sector, Brigadier General Massimiliano Stecca, who welcomed the guests including the Qaemaqam of Tire, Mohammed Alì Jaffal and of Bint Jubayl, Charbel Al-Alam, as well as the president of the Municipality of Tire, Hassan Mohammed Dibouq, and the representative of that by Tibnin Ali Fawaz.

Among the religious authorities intervened on behalf of the mufti Schita, the sheikh Rabih Kobeissi, for the archbishop Melkita ser Elie Bshara Hadad, father Marius and the Maronite archbishop ser Charbel Abdallah.

The meeting, held in full compliance with the rules for the containment of COVID-19, gave the commander of the UNIFIL Mission the opportunity to make direct acquaintance with the major representatives of Local Institutions.

The meeting strengthens relations between UNIFIL and the public and religious institutions of Southern Lebanon which, synergistically, continue to work to ensure that UN Resolution 1701 is applied and respected.

The Italian mission in Lebanon is currently led by the "Pozzuolo del Friuli" cavalry brigade, in its sixth term in the "Land of the Cedars" with the colors of the United Nations, and is responsible for west sector of UNIFIL in which 3800 UN peacekeepers operate from 16 of the 46 contributing countries to the UN mission and of which about 1.000 Italian soldiers are part of.

The commander of the NATO Mission in Iraq (NMI), gen. Giovanni Maria Iannucci met at the Hotel Al Rashid in ...
178
Read

Nave Caio Duilio has recently crossed the Pillars of Hercules, undertaking the oceanic route that will bring unity ...
55672
Read

With the last two courses in favor of the National Police of Djibouti (PND), the activities of the section ...
594
Read

The Eurofighters of the “Black Storm” Task Force Air, located at the Mihail Kogălniceanu airport in Constanta - Romania ...
3269
Read