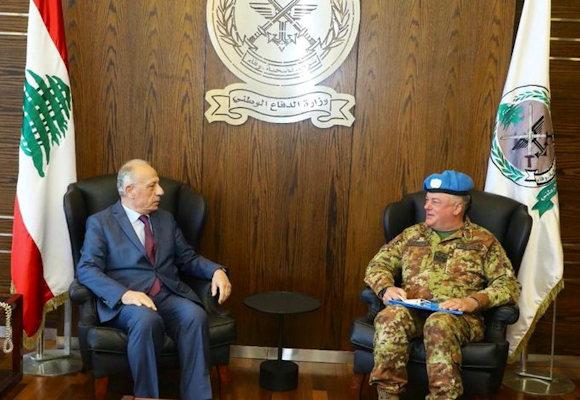 Last Friday in Beirut on Jan. Del Col, head of mission e force commander from UNIFIL he met the Lebanese Minister of Foreign Affairs Abdallah Abou Habib; the meeting is the third in a series with high institutional positions following the formation of the new Lebanese government. The meetings took place in government buildings in an atmosphere characterized by maximum collaboration and synergy with the UNIFIL mission.

The gen. Del Col recalled the importance of managing the delicate issue along the Blue Line in order to proceed with the full implementation of all the aspects envisaged by the UN Security Council resolution n.1701 of 2006 and the prescriptions contained in the subsequent ones, up to the last n. 2591 (2021) which renewed the mandate until August 2022.

To Defense Minister Maurice Sleem (photo), met last Thursday, the gen. Del Col remarked how the Blue Line represents the center of gravity of UNIFIL operations and how essential it is to maintain the existing balance to avoid potential escalations that could compromise the cessation of hostilities. The launch of rockets from Lebanese territory and the Israeli response with claw shots in August jeopardize the stability of the area. He also emphasized the importance of the "tripartite", a formal table managed by UNIFIL with representatives of the Lebanese and Israeli Armed Forces, for the resolution of problems relating to Blue Line, underlining the need to expand this forum as the Security Council recently indicated.

The UNIFIL head of mission, in his meeting with the Minister of Foreign Affairs Abdallah Abou Habib, greeted the Lebanese government's intention to resume the table for the full definition of the Blue Line, underlining that the resolution of all problems relating to the areas disputes represents an element of facilitation for the normalization of relations.

On both occasions, the head of mission also recalled the content of the recent resolution 2589 (2021) which recalls the responsibility of the States hosting peacekeeping missions to guarantee the security of UN personnel and to bring to justice those responsible for any crimes and violent acts. conducted towards the same staff. In this regard, he recalled the investigations of the incidents against UNIFIL, which occurred in 2018 and 2020, which have not yet been concluded. The gen. Del Col concluded by emphasizing his priority attention to the safety of peacekeepers of UNIFIL which must be protected by local authorities.

The ministers thanked UNIFIL recognizing its role as a strategic partner of the country, in particular the further support to the Lebanese Armed Forces will allow the continuity of joint operations with UNFIIL to ensure the security of southern Lebanon.