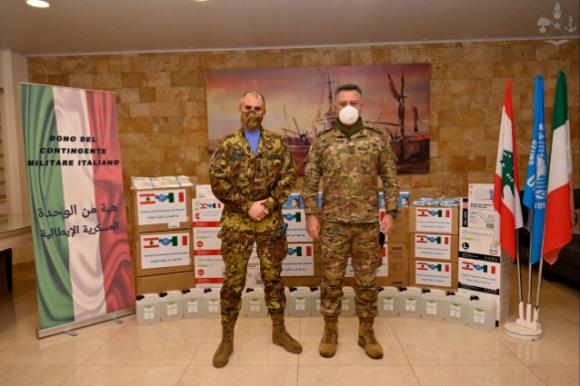 The Italian Blue Helmets of West Sector of UNIFIL, have conducted in Tire a donation of medical devices (DPI) in favor of the infirmary of the Lebanese Armed Forces (LAF) which works in support of the military and the local civilian population.

General Kobayati, speaking, underlined the strong bond that has been established between the Italian contingent and the local population and thanked for the help that Italy has been providing and continuing to provide for many years.

The donation, coordinated by the G9 Cell (Civil and Military Cooperation) of the Italian Blue Helmets, is one of the activities envisaged by Resolution 1701, supporting the local population and the Lebanese Armed Forces.

The project is part of the intervention initiatives and essential support to the civil environment of the health sector and is aimed at reducing and contrasting COVID-19 through the material made available by the Italian Commissioner Structure.

The frigate Carlo Bergamini returned to Taranto on 2 July at the end of a long period of assignment ...
184
Read