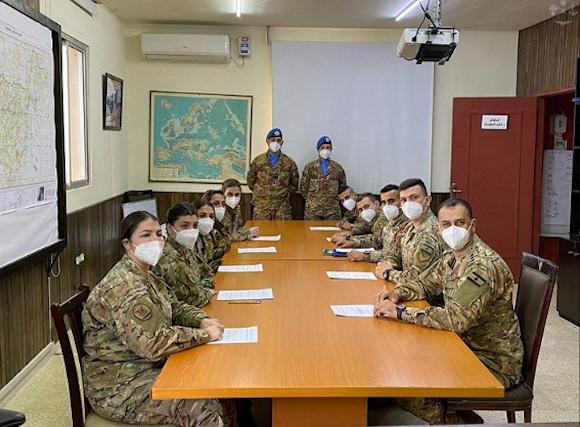 The training activities carried out by the people of ITALBAT, inserted in the West Sector of UNIFIL, on the “Friuli” aircraft brigade base, in compliance with resolution 1701, which provides for support to the Lebanese Armed Forces, as part of the fulfillment of the mission, continue.

The "Italian language" course conducted by the staff of the Task Force concluded in recent days Italbatt based on the 66th "Trieste" aircraft infantry regiment in favor of ten officers and non-commissioned officers belonging to the 5th brigade of the Lebanese Armed Forces having command in the town of Al Bayada in the area of ​​responsibility of Italbatt.

The teaching activity, which took place from November 2021 to January 2022, was developed on a basic class typology, aimed at acquiring everyday expressions and basic phrases aimed at satisfying needs of a concrete type, in order to ensure the achievement of a minimum of autonomy in elementary communication contexts.

The purpose of this course, expressly requested by the command of the Southern sector of the Litani of the LAF, is aimed at making the Lebanese Armed Forces, especially in light of the daily and effective collaboration that takes place between the Italian and Lebanese soldiers on the ground, as well as for the linguistic training of exchange personnel at the multinational commands of UNIFIL.

Equally, no less important, the activity has led to a consolidation of the already excellent relations between two communities linked by ancient and deep common origins.

At the end of the course, during a short ceremony held in compliance with the preventive measures for Covid-19, the military was awarded a certificate of participation.

The frigate Carlo Bergamini returned to Taranto on 2 July at the end of a long period of assignment ...
234
Read

With the participation of gen. ba David Morpurgo, deputy commander of the DACCC of Poggio Renatico, at the Distinguished ...
215
Read

In the presence of the air squad general Nicola Lanza de Cristoforis, deputy commander of the Operational Command of ...
864
Read