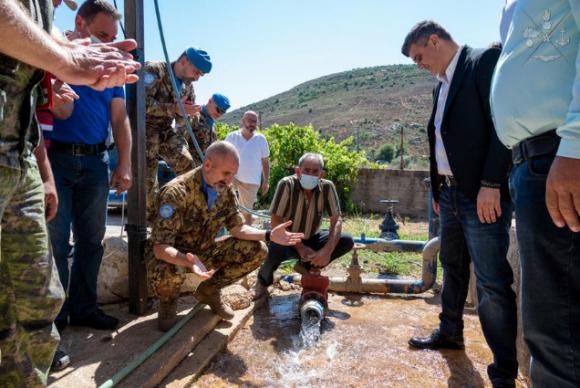 Production of electricity through the supply and installation of a photovoltaic system to power a pump for lifting the water of an artesian well, donation of 6 computers to a school and donation of toys to the local church.

These are the events of Civil-Military Cooperation (CIMIC) carried out by the Italian contingent in Lebanon in recent days in nearby Rumaish, a municipality included in the area of ​​responsibility of the West Sector of UNIFIL under Italian leadership.

All events were chaired by the Brigadier General, Massimiliano Stecca, commander of the West Sector UNIFIL and the Italian contingent in Lebanon.

All the initiatives completed have received the applause and thanks of the local authorities, who have expressed feelings of esteem and gratitude towards the Italian contingent for the donated materials, fundamental to alleviate the daily problems connected with the economic and social crisis that is crossing Lebanon, thus bringing a smile to the faces of the children who represent its future.

The donation of the photovoltaic system, organized by the G9 cell (Civil-Military Cooperation) of the command Sector West, is part of the intervention area intended for essential support for the civil environment / electricity. 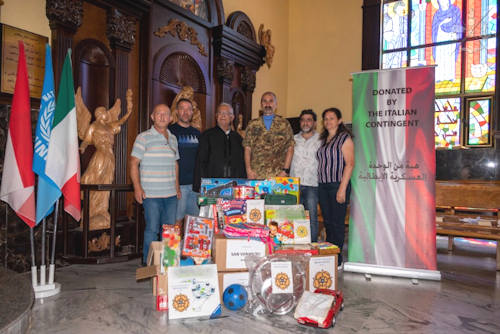 The computers donated to the public Technical School arrived thanks to the joint commitment of the National Cavalry Weapon Association (ANAC) of the Veneto Region and the Lagunari Amphibious Troops Association (ALTA) of Treviso, always alongside the National Contingent of Leonte XXXI in the initiatives promoted in favor of the population.

Finally, the toys donated to the Tajaly church came from Italy thanks to the Regina Elena International Association, constantly present among the numerous volunteer and assistance organizations that have responded to the call to help the Lebanese population in this time of serious economic crisis and social.

The Italian mission in Lebanon is currently led by a cavalry brigade Pozzuolo del Friuli, in his sixth term in the Land of the Cedars with the colors of the United Nations, and is responsible for the West Sector of UNIFIL in which 3800 UN peacekeepers operate from 15 of the 46 contributing countries to the UN mission and of which about 1.000 Italian soldiers are part of.

The activities carried out in the operating theater are conducted under the coordination and according to the directives given by the Interoperable Summit Operations Command (COVI), led by the general of the army corps Francesco Paolo Figliuolo.

The Aerial Shield exercise has just been held at the RC-W Camp Villaggio Italia, dedicated to the defense of Counter ...
152
Read

The units of the Regional Command West, framed under the Piedmont Cavalry regiment (2nd) of the Army ...
5829
Read

Nave Thaon di Revel, the last ship delivered to the Navy, left on 12 August from the port of La Spezia to ...
2384
Read